JACKSON – Kneedra Bell grew up watching TV’s original food personality, Julia Child, explain the finer points of cooking and saw herself in the down-to-earth, sometimes mistake-prone host of “The…
By: Danny Barrett Jr. 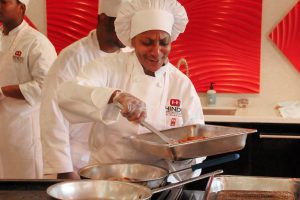 Kneedra Bell, of Clinton, a culinary arts student at Hinds Community College, moves some marinated shrimp from one pan to another during the third annual Fall FEASTival at Township at Colony Park in Ridgeland on Oct. 26, 2017. Teams of Hinds culinary students from the Jackson Campus competed against each other at the event, which was presented by the Partnership for a Healthy Mississippi. (Hinds Community College/Danny Barrett Jr.)

“Watching Julia made me feel good about mistakes because that taught viewers like me that it was OK to make a mistake,” Bell said. “She showed us that mistakes can teach us to do it better or correctly the next time we try.”

Bell, 51, who was born in Edwards and grew up in Los Angeles where her family moved, later attended college in California and majored in chemical engineering, which at the time she viewed as an adequate career path for a single, unwed mother who needed to support an infant daughter. “But, engineering was not my passion – cooking was, which made it easier for me to simply chose to stop going to college and work full-time to support my family. I promised I would “one day” return to college to complete my college education.”

Nearly 30 years, two marriages and five grandchildren later, she’s about to make good on that promise. On Dec. 15, she joins more than 1,000 other students who will earn their credentials from Hinds Community College in three ceremonies at the Muse Center on the Rankin Campus.

In addition to the Associate of Applied Science degree and career and technical certificates she’ll have, she will have also earned the respect of peers and instructors on many fronts. She’s worked five days a week as a bus driver for the Clinton Public School District while attending classes and study groups at Jackson Campus-Academic/Technical Center.

“She is the first to arrive, last to leave and is completely giving of herself, her time, and her talents,” said Chef Austin Lee, director of the Culinary Arts Institute at Hinds. “And she is more interested in the team crossing the finish line than making it herself.”

For Bell, it’s a team that includes her “culinary family” of classmates in the kitchen, her “student-children” on her bus each morning and, of course, her own three children and five grandchildren.

“Being a single mom made juggling my job, school and my home life a demanding challenge,” she said. “My schoolwork became my social life. I established a committed relationship with my books. I had a date-night seven nights a week with my homework. I embraced the struggle of my doing my homework in tandem with helping my children with their homework.

“Hinds Community College will always be a historic landmark in my heart that marks a successful chapter in my life’s journey.”