For years, both during and after each had made their mark on education in Warren County, Clyde Donnell and Othel Mendrop strode the greens of Clear Creek Golf Club in Bovina to talk about the college and the game each loved.

Both are gone now, but this year the Hinds Community College golf tournament and scholarship benefit that had honored one will now honor both.

“He was committed to Hinds in no uncertain terms,” Caroline Mendrop said this month, as organizers with Hinds’ Alumni Association prepared to add her late husband’s name to that of Donnell’s in the title of the scholarship benefit put on by the association’s Warren-Claiborne County chapter. “All my children went to Hinds, and we are a Hinds Junior College family.” 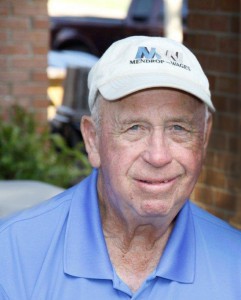 The Clyde Donnell and Othel Mendrop Memorial Golf Tournament is Sept. 16 at the east Warren County golf course and will again benefit a scholarship fund for students through the Warren-Claiborne County chapter of the Alumni Association. About $160,000 has been raised in the more than 25 years since the tournament began. Proceeds from the tournament began going to the scholarship in 1999. The scholarship became endowed in 2003.

Registration begins at noon, with play to begin at 1 p.m. For more information, contact alumni coordinator Libby Posey, at 601.857.3350.

Born in Vicksburg in 1927, Mendrop attended Hinds and Memphis State College on basketball scholarships. After a master’s degree in administration from Mississippi College and four years in the U.S. Air Force, he coached basketball and football and was principal in the former Warren County School District. For 10 years, he was principal at Warren Central High School and coached girls track there. Later, he became assistant superintendent of education for the district.

The 1989 inductee to the Hinds Community College Sports Hall of Fame also coached youth sports and continued to enjoy watching his family’s activities after retiring. The great-grandfather of four died in 2014.

“He loved Hinds and he was thrilled to see his children and grandchildren do well, especially in sports,” said Melanie Mendrop Dornbusch, one of four children. “Clyde Donnell was a buddy of his and they were in a golf group. They loved to play.”

Donnell was a member of the college’s Board of Trustees and the Foundation Board, as well as a former Warren County supervisor from District 1. He died in 2005, and the golf tournament’s organizing committee named the annual scholarship benefit for him.

Caroline Mendrop said the honor is befitting an ardent supporter of the college and champion for education.

“Hinds meant so much to him,” she said. “We felt so humbled by it. His friends told me when he died, ‘You know he’s got a tee time already up there.’”