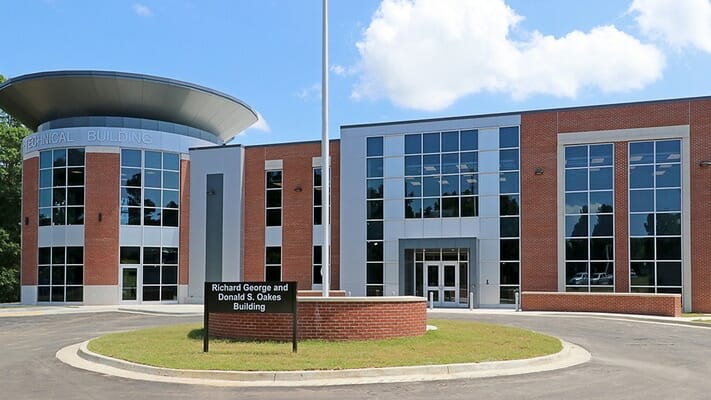 VICKSBURG — The George-Oakes Building on the Vicksburg-Warren Campus was formally dedicated May 10 during a ceremony inside a packed lobby in the new facility. 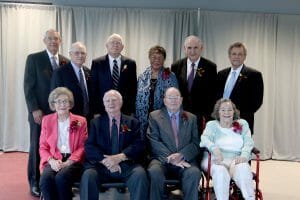 In addition to the new building, dedications were also recognized on seven other sites both in the new building and campus-wide, honoring eight additional people in the process.

The two-story, 40,000-square-foot signature building is named for Richard George, president of the Warren County Board of Supervisors, and Donald Oakes, former Vicksburg Warren School District superintendent and current member of the Hinds Community College Board of Trustees.

Warren County committed property tax dollars to help pay for the $13 million project. The building is also being funded by federal and state New Market Tax Credits through the Hinds Community College Foundation.

“When you’ve got people like Mr. Breazeale, Dr. Muse, Joe Loviza, Mr. Moak, Donald Oakes and numerous other individuals of accomplishment and true grit come to you with a plan and ask for financing, it’s a real easy decision,” George said. “It’s delivered in a fashion that’s straightforward – this is what’s it’s going to cost you, this is what we Jneed to do and this is where we’ll be headed.”

Oakes and Dr. Muse credited the county board as a vital first step in jump-starting construction on the building two years ago. Oakes also noted the impact and positive changes for the community in Vicksburg and Warren County as a whole since the campus opened in 1975.

“In 1965, when I used to drive this highway to go to Warren Central High School when it was opened, there was nothing on this hill but cow pasture,” Oakes said. “As you look at it now, it’s the place for opportunity for people of Vicksburg, Warren County and the surrounding area. Uncounted numbers of people have been touched by this institution.

“This institution has made an impact on so many lives,” he said. “It doesn’t have to have been a college graduate. It could be just having taken a brick masonry course, a carpentry course or an auto mechanics course. It’s made a difference in the lives of the people in this area.”

Muse touched on quality of life in the community as a key benefit of the county board’s cooperation to help fund the new building. “It’s great to work with them,” he said. “They’re interested in the quality of life of the people here in Vicksburg and Warren County.

On the facility’s two unique aspects, Muse said, “One is to train a workforce for this area that will help every business and industry have a skilled workforce to enable them to grow, develop and turn a profit. It will also be open 24/7 so industry can get the workforce they need. It will be a wonderful opportunity to increase the education of citizens in Warren County to help them make a livable wage for their families.”

The George-Oakes Building features 10 classrooms, eight teaching labs, administrative offices, a downstairs training lab that holds about 50 participants and an upstairs multipurpose room that holds about 80 participants. The school district’s River City Early College program will be housed on the second floor.

“Today makes it all worth it,” Breazeale said, referring to the process of securing funding for the new building. “Hinds has a great legacy that’s been mentioned here today.”

David Campbell, assistant superintendent of the Vicksburg Warren School District, spoke of the role the early college program will play in the future of the campus. To be located on the second floor of the new building, it is a comprehensive four-year program in which students can earn a traditional high school diploma along with an associate degree from Hinds.

“Early College is designed to give students a non-traditional, accelerated high school experience and the opportunity to earn both a high school diploma and an associate degree,” Campbell said.

Loviza, the campus’ first employee when it opened, stressed the importance of community involvement in the new building.

“We have some good folks here in Warren County,” Loviza said. “We see them here today pulling together for your community college. You own this, folks. We want you to use it.”

The downstairs training lab will be named the Bruce Training Lab in honor of William F. “Sonny” Bruce, a former superintendent of Vicksburg public schools. Also in the new building, the upstairs multipurpose room will be named the Peets Multipurpose Room in honor of Charles Peets, who has served on the Vicksburg-Warren County Campus Advisory Board for many years and is currently serving as chairman.

Bruce taught shop in the city school system, before the merger of the city and county schools, and was instrumental in helping establish the Vocational-Technical Center, which was the beginning of the campus.

A former church building that houses the nursing program on campus will be named the Gage Building for Howell “Hal” Gage, longtime Vicksburg and Port Gibson banking executive. Gage has served several times on the Hinds Community College Foundation board and, through his work with the Vicksburg Medical Foundation, has been instrumental in scholarship efforts and faculty development for Hinds Community College nursing programs.

The former Vicksburg Warren School District administration building, next door to the main part of campus and still owned by the school district, is being named the Pickett Building, for Robert Pickett, a former school district superintendent who was president of the Hinds Board of Trustees when he died in 2014.

A former auto mechanics building, now housing the criminal justice program, will be renamed the Hallberg Building after Walter B. Hallberg Jr.

A multipurpose auditorium in the Loviza Building will be named the Chaney Auditorium in honor of 1950 alumnus Mark Chaney, former chancery clerk and state representative, who has served in leading roles with the Warren County School Board and, more recently, the Hinds Community College Alumni Association. As vice president of the Warren County School Board, Chaney was instrumental in helping to secure the land, as an authorized bidder, where the Vicksburg-Warren Campus now sits.