RAYMOND – I’Esha Granderson, of Jackson, has rung up many an order since leaving high school without a diploma, mainly pastries and fill-ups at gas stations. But the Jackson mother…
By: Danny Barrett Jr.

RAYMOND – I’Esha Granderson, of Jackson, has rung up many an order since leaving high school without a diploma, mainly pastries and fill-ups at gas stations.

But the Jackson mother of two decided it was time to try for a career instead of settling for low-paying jobs. 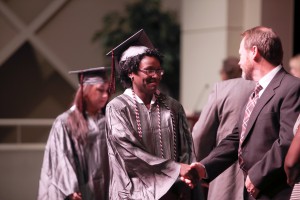 “I’ve been out of high school eight years working at lot of dead-end jobs,” Granderson said. “I’m 25 with two children, so I felt it was time to move forward with my life.”

Granderson was among 37 people of varying ages and stations in life recognized during a ceremony Thursday, June 23 at Cain-Cochran Hall on the Raymond Campus for achieving their General Education Development high school equivalency certificate this academic term.

She sees herself being in charge of the products once she continues and completes her education – and honor her deceased grandmother along the way.

“Culinary arts and business management,” she said. “I want to own a business and work for myself. That way, I’ll know the quality of food I’m serving other people.”

“My grandmother, Monevia, opened her restaurant in Tchula in 1991, the year I was born. Everyone there knew her as Nancy, or Nan. It was called Nancy’s Kitchen. She ran it herself until she passed away in 2011. I know she’s smiling down on me.”

She was among 11 participants in the MI-BEST program at Hinds who received a GED during the ceremony. MI-BEST is Mississippi’s version of the nationally recognized Integrating Basic Education and Skills Training program, or I-BEST. It allows adult students to train for a job skill while earning their GED high school equivalency certificate at the same time. Students are prepared to be job-ready in six months to a year, train in high-demand areas and earn national certifications.

Another was Ashley Clark, who enrolled in the program at the Vicksburg-Warren Campus five months ago. 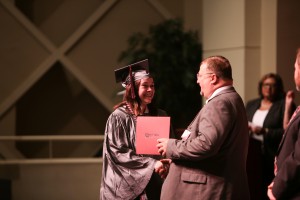 “The professional development class offered with the MI-BEST program has helped me bring me to a more professional level,” Clark said. “My employer, friends and family can tell how I carry myself now.

“I’ll have a Career Readiness Certificate by the end of next semester. And I should have my associate’s (two-year degree) by next spring.”

Susan Brown, 60, of Edwards, an employee of Hinds in Admissions, was the eldest student to walk across the stage and receive her diploma. Hinds President Dr. Clyde Muse handed it to her personally. 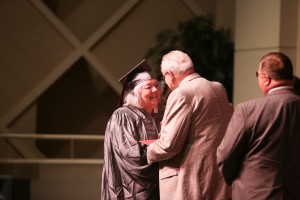 “One of the people who had really tried to inspire me to go back to school was actually Vashti Muse,” Brown said, referring to Dr. Muse’s wife, who died in 2010. “But I kept putting it off. But, last year, I dug in and said, ‘All I can do is fail, right?’ I just want people to know[tweetable alt=””] it doesn’t matter how old you are, you can get a degree.”[/tweetable]

Dr. Rachel DeVaughan, an Adult Basic Education program specialist for the Mississippi Community College Board, spoke to this year’s recipients with a message of not giving up despite background and circumstances. 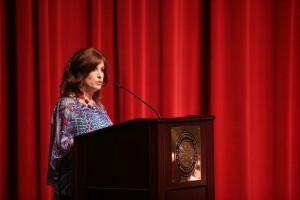 DeVaughan, a mother of two, had received a GED by the age of 19 after dropping out of high school. She returned to school at age 28 to pursue her dream of being a teacher, a journey that culminated in 2014 with her earning a doctorate in education.

In between, she rose through the ranks of McDonald’s, where she had first started work at 16, working in management and supervisory roles in the worldwide fast food chain’s restaurants in the U.S. and in England. Since 2005, she has been a middle school teacher, a curriculum specialist and an assistant dean of instruction at Mississippi Gulf Coast Community College.

“I knew I wanted more out of my life for my children,” DeVaughan said. “I realized the only way I was ever going to get ahead was to get more education.

“Some of you might not feel very confident as a student, and that’s OK,” she said. “Confidence is a feeling. Courage, on the other hand, is a choice. And you were courageous in your choice to come to Hinds Community College and work toward completing your high school equivalency diploma.”

GED recipients who were honored Thursday and their stated hometowns included:

Fifteen of the 37 recipients present, including Granderson, were Honor Students, awarded scholarship funds, or both. Granderson received a $500 cash award from the Education Pays Program. The program began in 2009 as a partnership between Hinds and the Craig H. Neilsen Foundation to make funds available for all Hinds CC Warren GED recipients over the age of 21. The foundation has expanded the program to the Jackson Campus-Academic/Technical Center.

Scholarship funds were also made available to this year’s GED recipients by Central Mississippi Planning and Development District and the Adult Education Advisory Council. 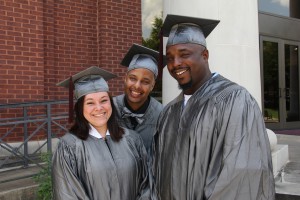