From hamburgers to healthcare, Hinds CC alum has taken care of his customers

Note: The following story appears in the summer issue of Hindsight alumni magazine. For more information about the Hinds Alumni Association, see the website. JACKSON – Before Carl Mangum was…
By: Danny Barrett Jr.

JACKSON – Before Carl Mangum was certified to take a pulse, he could still take an order – either crispy or with fries, that is.

“In a former life, I was a restaurant manager,” Mangum said of his days working in chicken and burger outlets in the Jackson area. “I’m a graduate of Hamburger University – on the dean’s list.” 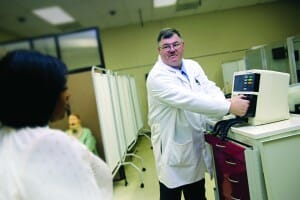 Dr. Carl Mangum, an instructor at the University of Mississippi Medical Center School of Nursing, demonstrates a piece of machinery in the school’s learning lab. (April Garon/Hinds Community College)

Mangum, his wife, Christina, and three young sons came to the same crossroads where many young families find themselves. “I was looking for something else to do. I was working for 100-plus hours a week and making very little money. I needed to do something different.”

A boyhood fascination with emergency medical technicians, spurred by a TV series, turned into a life-altering decision. “I always wanted to be a paramedic, because of the TV show “Emergency!,” from the 1970s. The show followed two paramedics in Los Angeles and their station. And so I thought it was cool.

“But, why [tweetable alt=””]I went back into nursing school was to make a better life for me and my family[/tweetable].”

He enrolled at Hinds, and the family scraped by at first, with Mangum working part-time jobs. But he hasn’t looked back since graduating in 1994.

After completing the Associate Degree Nursing program at Hinds, he moved on to the University of Mississippi Medical Center’s School of Nursing, where he earned his bachelor’s and a master’s, in Psychiatric Mental Health/Nurse Practitioner. He also has a Ph.D. in leadership from the University of Southern Mississippi.

His work in mental health began during his time at a program with the Mississippi State Hospital in Whitfield. It paid Mangum a monthly stipend in exchange for working with the facility as he went through school, and it became a passion.

“When I graduated, I had a job waiting for me there,” he said. “I was on their educational leave program, which means I signed up with them for four years. “Mental illness is not the dragon people claim it to be. It’s a brain disease – no different than heart disease, cancer, diabetes, anything else. It just involves the brain instead of the heart or the pancreas.”

In keeping with his passion, Mangum, of Byram, teaches a Psychiatric Nursing course at UMMC, as well as the Assessment, Fundamentals and Health Promotion courses. He’s also a certified volunteer firefighter and a HAZMAT technician. Also, he commands the Mississippi-1 Disaster Medical Assistance Team, part of the National Disaster Medical System with the U.S. Department of Health and Human Services.

“I’ve responded to Hurricane Sandy, in 2012, and was deployed for Hurricane Ike, in 2008, in the command center in Austin, Texas,” he said. “For Hurricane Katrina, I did a lot of stuff at the Fairgrounds and Coliseum. UMMC set up a clinic there a couple of days in, to help get them medicine if they were out.”

His life in the medical field has come alongside success for wife Christina and similar career paths in the family.

She teaches math at Murrah High School and now has three master’s degrees. All three of his daughters-in-law are also nurses.

From his days at Hinds, he remembers the unique personal touch, which along with his experiences in the working world, he channels into his own teaching style.

“Nursing school is quite difficult,” he said. “It’s one of the hardest things you can choose to do. Hinds was my way of getting into the profession. The faculty was great, caring people. But, I also use principles in the hospital that I learned in the food industry, because we’re a service industry, too. It’s just with healthcare, and not hamburgers.”

“As a professional, he never settles,” said Sherri D. Franklin, director of the RN-BSN program at UMMC School of Nursing and classmate of Mangum’s during their days at Hinds. “He always seeks opportunities for development and is a great mentor to students and less-experienced co-workers.”

And it’s a certain versatility with today’s students that’s the strongest vital sign in Mangum’s life in healthcare.

“Students want that recognition and want us to be proud of and pleased with them. So, I do the high-five type of stuff to say, ‘Hey, great job!’

“And, still, if they’re doing something wrong, you want to be stern with them since we’re dealing with people’s lives here.”