Note: The following story appears in the winter issue of Hindsight alumni magazine. For more information about the Hinds Alumni Association, see the website. RAYMOND — Jim Hatten has been down many…
By: Danny Barrett Jr.

Note: The following story appears in the winter issue of Hindsight alumni magazine. For more information about the Hinds Alumni Association, see the website.

RAYMOND — Jim Hatten has been down many trails in his professional career, from that of a jet engine mechanic to a salesman. These days, he’s blazing a new one fostered by his Hinds experience — first as an instructor but, more recently, as a student.

The 57-year-old Jackson native and former staff sergeant in the U.S. Air Force was an instructor in the college’s Aviation Maintenance program from 1992-95. He was both teacher and marketer, working to promote the program with aviation businesses. 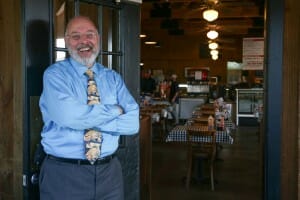 Jim Hatten stands outside Chimneyville Smokehouse in Jackson. Hatten markets the Mississippi BBQ Trail, which promotes barbecue restaurants in the state such as the downtown Jackson staple. The listing was conceived during his time as a student at Hinds Community College. (Hinds Community College/April Garon)

“I’m very grateful for the opportunity,” he said. “I enjoyed the students and did a lot of different things. Inspiring the students was really a great pleasure for me. I had a good experience working at Hinds.”

His professional life then took a circuitous path. He spent eight years in engineering and design in the aerospace industry, then took to the road as an insurance salesman and became involved in commercial property development.

Then in 2011 two seemingly unrelated events formed the idea that became his next life — the Mississippi BBQ Trail, a marketing vehicle for barbecue restaurants in the state.

“At one (commercial) property, there was this 5,000-gallon steel fuel drum they wanted to turn into a barbecue grill. The same week, Smithsonian Magazine came out with something about the feral hog epidemic in the South. I thought, man, wild hog barbecue is some of the best-tasting meat you ever put in your mouth. I started thinking of ways I could help sell that.”

Months of research into the state’s barbecue offerings became Hatten’s homework when he returned to Hinds in 2013 as a student in the Marketing Management Technology program.

While working on a class project, “I came up with 263 barbecue joints in the state,” he said.

“Most of these places are mom-and-pop operations with five to nine employees and make less than $250,000 a year. That tells me they can’t afford to advertise two blocks down the street. For the locally-owned barbecue joint, they don’t have any visibility. And only 21.7 percent had a website. That told me the tourists can’t find them,” he said.

His class projects garnered top grades, for which he credits instructors at Hinds as well as for bringing his marketing knowledge into the 21st century. The fruit of that labor can be seen on the trail’s website, at www.msbbqtrail.com.

“While in my class, Jim learned how to build a website, the concepts needed to manage a website and how to publish a website,” said Jo Ponder, who instructs Computer Programming Technology on the Raymond Campus. “Jim took that knowledge and elevated it to a working model.”

The trail itself connects locals, tourists and grill foodies alike to local businesses which register to be on the listing site. A potential “stop” on the trail must have a business license, cook and serve barbecue pork and/or beef and have a valid health department inspection certificate.

Hatten describes the state’s barbecue restaurant scene as a world market of sorts, where all culinary styles on the grill can be found.

Hatten sees his efforts to promote the industry as simply paying it forward.

“My teachers, my coaches, my mentors, find somebody who needs help and help them,” he said. “And here’s an entire industry that’s underrepresented online. I just want to give people a reason to turn off the road and get something to eat.”