[tweetable alt=””]Scholarship students at Pisgah High School were stars of the day May 6[/tweetable] for the school’s second annual Academic Signing Day event for college-bound seniors.

Two dozen seniors at the Rankin County school joined family, friends and many others in a packed gymnasium for a ceremony geared to mimic that of “signing day” events for student-athletes. 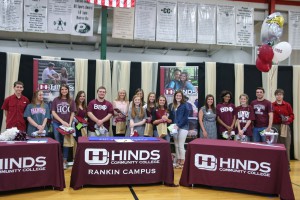 “We always celebrate our athletes who get college scholarships,” said Lillian Sims, an English teacher at the school who organized the event with fellow teacher Racquel Ross.

About a year ago, one of Sims’ students received both an athletic and an academic scholarship. The academic one went unnoticed and uncelebrated, Sims said.

“I realized it was tangible evidence we’re prioritizing athletics when it comes to college, and not academics,” she said. “Most of our students will not have an athletic scholarship, so I decided to have this day in recognition of all those hardworking students who’ve never stood in front of a crowd before, but they’ve put in just as much effort.”

Many of the students highlighted during the event have received at least one academic scholarship to a two- or four-year institution and participated in multiple activities outside of class. Many are members of the Rankin County school’s Beta Club, National Honor Society chapter and/or Phi Theta Kappa organization. 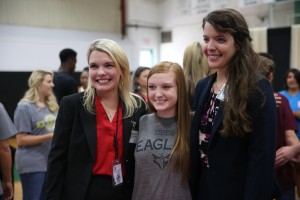 Some, such as Julie Thompson, among 15 who signed a commitment to attend Hinds Community College, will be the first in their families to attend college.

“I’ll be majoring in nursing,” said Thompson, accompanied by several members of her family. Thompson is president of the school’s Beta Club, as well as a member of NHS and PTK. She’s also secured three scholarships from the college.

“I’ve always wanted to help and care for people. I’ve always had a big heart.”

Career-tech options, such as high-tech manufacturing jobs, are also on the radar of Pisgah’s scholarship class of 2016. 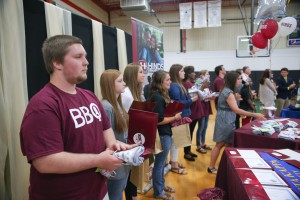 “Most of my family went to Hinds,” said Arryn Peterson, a Pisgah senior who plans to enter the college’s Industrial Maintenance program, which trains students to work in modern-day manufacturing plants with the latest mechanical and electronic equipment.

“I’ve read a lot about the Industrial Maintenance class, and I think it’ll be a great class for me to learn,” he said. 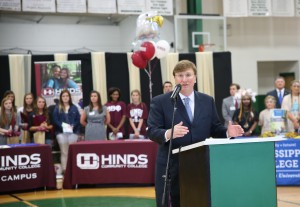 “I get to speak to a lot of large groups,” Reeves said. “But, this morning is particularly special, because I get to speak to a group in my hometown, in the school district I graduated from, in the gym I played in, to celebrate the successes of these students behind me.”