Going back to school to advance a career can be inspired from many places – even from coworkers and other peers, as some Transportation Security Administration officers (TSOs) working at…
By: Danny Barrett Jr.

Going back to school to advance a career can be inspired from many places – even from coworkers and other peers, as some Transportation Security Administration officers (TSOs) working at Mississippi airports have learned.

Fifteen of them were honored March 17 during an achievement ceremony in Jackson for having completed a nine-credit TSA Associate’s program administered by Hinds Community College that helps the agency’s officers develop and expand their careers in Homeland Security. 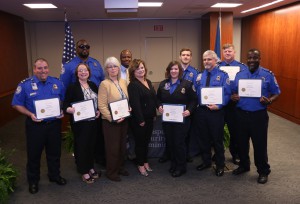 “When the program first came out, it was for the people at the airports,” said Robert Weis, lead officer based at Gulfport-Biloxi International Airport. “A person who was in there was one of my mentors, TSO David Smith. He talked to me about the program and got me interested.”

Those receiving certificates of achievement at the ceremony held at Jackson-Medgar Wiley Evers International Airport (JAN) completed three classes over three semesters at Hinds. The program is part of an effort at community colleges nationwide, along with 240 partnering airports. TSA’s partners in Mississippi include the Jackson and Gulf Coast airports, as well as Golden Triangle Regional (GTR), Meridian Regional (MEI) and Hattiesburg-Laurel Regional (PIB).

[tweetable alt=””]Mississippi’s TSA Associate’s program is the first to pilot a hybrid class of classroom and online students.[/tweetable]

Weis, for example, was able to take the course load of Introduction to Homeland Security, Intelligence Analysis and Security Management, and Transportation and Border Security while working his normal hours.

“I was doing the program from all over the United States,” Weis said. “I highly recommend the program.”

TSO Clay Simmons, a behavior detection officer at the Jackson airport, is a few hours short of a degree in nuclear medicine. Still, he couldn’t pass up the chance to broaden his studies in Homeland Security.

“Everyone was able to give their opinions, and there were no right or wrong opinions,” Simmons said. “I was a good learning experience to get different perspectives from everyone, different policies and procedures about how you do your job every day.”

The nine credits earned in the program can be used toward an associate degree. At Hinds, the program’s classroom courses were taught at the Rankin Campus and instructed by Oscar Branch and Charlette Oswalt. 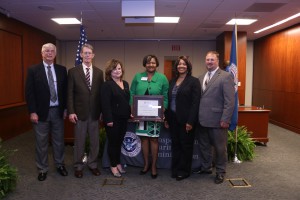 Cooperation was a key facet of the program’s success at Hinds, thanks to both entities and officers’ families, officials said.

“Never had I seen the enthusiasm and cooperation I’ve seen from TSA and all the people here to put this unique program together,” Hinds President Dr. Clyde Muse said. “It gave us an opportunity to work with you to have one of the best, interactive, online face-to-face programs in the country.”

Jeffrey Redmann, director of the business management office in TSA’s office of training and development, lauded the officers and their families for being part of an agency he said screens 1.8 million travelers daily nationwide.

“Ours is a noble profession, often thankless, but very important,” Redmann said. “What you do and how you do it matters. In a given week, you’ll screen thousands of people and their bags. You’ve probably heard this before, but it bears repeating. Terrorists only have to be right once. You have to be right every single time.”