RAYMOND – Engineer soldiers rely on solid planning and execution to make any mission run smoothly. Thanks to the classes he took at Hinds, Brig. Gen. Janson D. (Durr) Boyles…
By: Danny Barrett Jr.

Thanks to the classes he took at Hinds, Brig. Gen. Janson D. (Durr) Boyles was properly equipped to handle his own academic mission, which was to become an engineer. 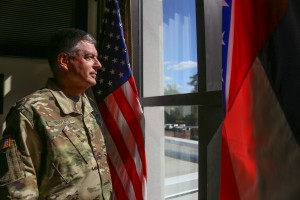 “I went to Mississippi State out of high school and studied engineering,” Boyles said. “I got into calculus, which was challenging. In calculus, if you don’t have an early understanding of the subject matter, you never get it. I passed it, but I came back to Hinds and passed it again to make sure I understood the subject matter.”

Boyles sharpened his skills in the classroom at Hinds, he said, because the atmosphere was just right for doing so.

“It was a friendly campus, and the student-to-teacher ratio was probably the best part of it for me. The ability of the teachers to transfer the information from the book to where I’d understand it was key, too.”

Boyles’ career in uniform got a most handsome transfer in 2016 when he was appointed by Gov. Phil Bryant as adjutant general of the Mississippi National Guard. A Jackson native, Boyles followed up his bachelor’s degree in engineering by entering the Army in 1982. Later, in 2005, he earned a master’s in Strategic Studies from the United States Army War College.

Even with those responsibilities, he needn’t look further than Guard headquarters in Jackson to find a fellow product of a Hinds education. That is Lt. Col. Christian Patterson, public affairs director for the Guard.

“The quality of education that I received at Hinds Community College was outstanding,” Patterson said. “I was blessed to have strong instructors that prepared me for my studies at Louisiana State University in Baton Rouge. Hinds is strong academically, affordable, and close to home. I would highly recommend the school to any student seeking to receive a great education.”

For Boyles, that education helped instill a certain discipline before he ever put on a uniform.

“It’s really up to you to open your doors. But, try to have three, four, five doors open at a time that you can walk through,” he said. “Sometimes, they work out and sometimes they don’t. Getting an education at Hinds is one of those doors you need to walk through. And if you do, the people at Hinds will do their part.”