JACKSON – A stellar career for Becky Tustain teaching aspiring nurses in Hinds’ Associate Degree Nursing program began with just a small request of her husband. “When I came here…
By: Danny Barrett Jr. “When I came here in 1975, I asked my family for two years to go to school,” she said. “I didn’t think I could ask my family to give me but two years. I’ve gone on to a lot since then, but [tweetable alt=””]in my heart, I’m an associate degree nurse.”[/tweetable] 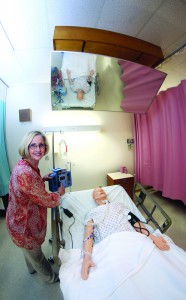 A decade out of Central High School in Jackson and already a mother of one of her three children, Tustain grabbed ahold of an education in nursing that morphed quickly into a profession. She earned her ADN credential from Hinds in 1977, then moved on to William Carey College for her bachelor’s five years later, all the while working as an instructor in Hinds’ program and a staff nurse at Mercy Regional Medical Center in Vicksburg, where she settled and still resides.

She completed her master’s in Nursing Education from the University of Mississippi in 1986. She retired from Hinds in 1995 to pursue a Nurse Practitioner’s credential, which she earned from Mississippi University for Women in 1998.

Such a quick turnaround from learning to teaching in the program meant she was with ladies she still calls the “icons” of the nursing program, which celebrates its 50th anniversary this year.

“Eunice Pace was our first dean at NAHC, then it was Bobbie Anderson,” she said. “We had Mildred Hearn, Dixie Keyes, Kay Stubblefield Jones, Linda Hughes, Sherry Avenmarg, Patty Baker.

“I knew I had a good core,” she said. “My mother had a stroke and my father had a heart attack during the few weeks between graduation and boards, so I didn’t get to study. I walked into boards, and passed them. That was because of that faculty.”

Tustain’s timeline teaching in the college’s nursing program runs closely with that of the Nursing/Allied Health Center itself, into which the program moved in 1982 from smaller venues on the Raymond Campus.

“When I started teaching, I volunteered to come in before my contract began because I wanted to start out doing it right,” she said. “Back then, the program was all done in this little-bitty room in the science building. But, we were much more functional than when it was in the old house and it had supplies. And we had some great faculty teaching me.”

There was no down time between the move to the new facilities and the teaching schedule.

“Dr. Muse said we will teach on that Friday and Monday, and we’d just move over the weekend,” Tustain said. “The moving company moved the heavy conference tables and other equipment, but they didn’t know how to set it up. It took about 20 of us women faculty, but we got the beds in and set them up. We moved Friday afternoon, we worked all day Saturday and Sunday, and we all taught Monday. Now, is that not teamwork?”

Moving into it might have been a group project, but her mark on the learning lab remains, down to the positioning of electrical outlets and mirrors above the beds so students could see what they’re doing – commonplace now, but unique among nursing programs at the time.

“The learning lab is my baby,” Tustain said. “I designed it to where student and instructor could see what they were doing, with the mirrors overhead.”

In 1985, Tustain, Anderson and ADN instructors in a handful of neighboring states organized what is today the Organization for Associate Degree Nursing. Anderson was its first president.

“The group was formed in order to protect AD nursing as an entry-level program for registered nursing as a whole,” Tustain said.

“It allowed people who couldn’t give four years of a financial contribution outside of work to do it.”

The ADN program’s brand is strong in Mississippi and in medical circles because of its tradition of quality instruction, she said.

“We were one of the larger and productive programs, and our pass rates were good, so everybody wanted Hinds nurses,” she said. “It’s because we did direct care. The faculty went with the student and did direct care. We didn’t just send them out to observe. It was hands-on learning.”