PEARL – Janie Kovach felt like an extra in the movie of her life when she began high school a few years ago. “It’s hard for those who need help…
By: Danny Barrett Jr.

PEARL – Janie Kovach felt like an extra in the movie of her life when she began high school a few years ago.

“It’s hard for those who need help to be noticed and for them to not be lost in the crowd,” Kovach said. “It’s very easy to be overlooked and to just hide in the shadows.” 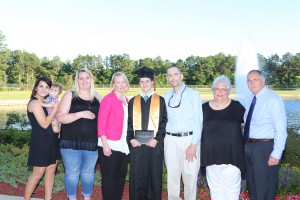 On Tuesday, June 7, Kovach was no extra – she had earned what amounts to top billing as valedictorian among 25 high school students in Rankin County who received diplomas and earned college credit this past semester thanks to the Gateway to College program. [tweetable alt=””]Gateway involves students who have dropped out of high school or are at risk of doing so.[/tweetable]

“I think I can speak for everyone and say high school wasn’t as easy for us as some of our peers,” Kovach said in an address during a graduation ceremony held at the Muse Center on the Rankin Campus. “For much of middle and high school, some of us were told we weren’t trying hard enough. Or that we just needed to apply ourselves. At times, it probably made us feel hopeless or that we wouldn’t amount to anything. 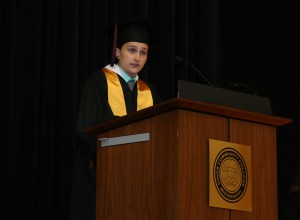 Janie Kovach addresses attendees at a graduation ceremony June 7 at the Muse Center for the Gateway to College program. (April Garon/Hinds Community College)

“But, coming to Gateway showed us we really do have a future. We were surrounded by three ladies who saw that potential in us and never let us forget it. They gave us helping hands, tough love and strong advice. They helped us exceed the expectations given to us so long ago held us to the same standards as any other high school student, if not a little bit higher.”

Kovach, of Northwest Rankin High School, finished the program with 24 hours of college credits she’ll use toward a pursuit of a psychology degree.

The ceremony was keynoted by Dr. Sue Townsend, superintendent of the Rankin County School District and member of the college’s Board of Trustees.

“Setting goals is a big part of life and success,” Townsend said. “Whether it’s continuing college or going into the workforce, it’s time to set your next goal. 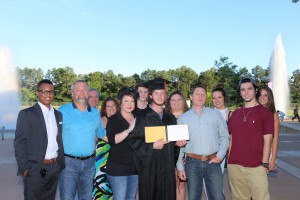 “I have Army National Guard on my mind,” said Flowers, also of Northwest Rankin, enjoying time post-ceremony with several family members and friends after earning three college credit hours. “I have being a history major on my mind.”

Christian Donaldson, of Brandon High School, looked back on how the program helped him get a foothold in his studies – a launching pad of sorts for his plans. He earned 26 college credit hours by finishing the program. 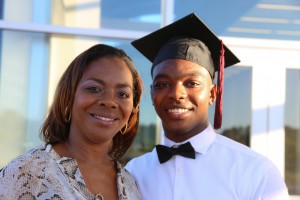 “Gateway was the best thing for me,” Donaldson said. “In high school, I was distracted and really not focused on my work at all. When I got here, it was better for me that I didn’t know anyone and it was a better fit for me.

“I plan to go to Jackson State, major in criminal justice and become a security officer in the Air Force.”

Gateway began at Hinds in the 2012-13 academic term at the Rankin Campus and was expanded in 2015 to the Vicksburg-Warren Campus. It functions as a Mississippi Works Partnership between Hinds and the two respective school districts.

Once directed toward the program, often by high school guidance counselors, students aged 16-20 are placed in small learning communities and take basic skills classes while dually enrolled at Hinds.

Students entering the program must read on an eighth-grade level and pass HCC’s placement test for full participation. Classes in reading, math, college skills and other subjects are then aligned for the level at which they would have been taken in a traditional high school setting.

At Rankin, the program is directed by Chandra Frazier and staffed by Ouida Holland, resource specialist, and Sherrie Daniels, administrative assistant. 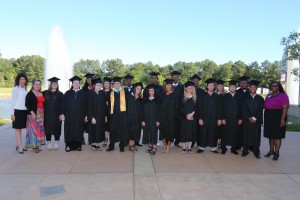