PEARL – For Laura Marie Barrett, being on a stage she once thought herself unworthy of her presence meant thanking a few people first. “I just want to say thank…
By: Danny Barrett Jr.

PEARL – For Laura Marie Barrett, being on a stage she once thought herself unworthy of her presence meant thanking a few people first. 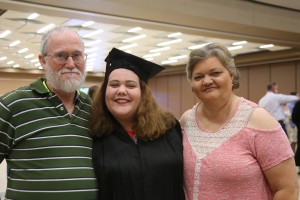 “I just want to say thank you so much to three wonderful women,” Barrett said, referring to the trio who have coordinated the Gateway to College program at Hinds Community College Rankin Campus. “They’ve helped me through hard times and difficult times these past two years.”

On Tuesday, June 6, she was among 18 students from Rankin County School District thankful for the opportunity to graduate high school and earn college credit this past semester thanks to the program.

Program director Chandra Frazier, along with program specialists Sherrie Daniels and Ouida Holland, were praised highly by students who told their stories to family and friends during a graduation ceremony held at the Muse Center.

“If it wasn’t for them, I wouldn’t have known about this program or learned how to push myself a lot harder than I used to,” said Barrett, of Florence High School, who earned 24 hours of college credits she’ll use to pursue a cosmetology career. “I thought since I had failed in regular high school, that was it.”

The program, in place since 2012-13 at the Rankin Campus, has involved students who have dropped out of high school or are at risk of doing so. Once directed toward the program, often by high school guidance counselors, students aged 16-20 are placed in small learning communities and take basic skills classes while dually enrolled at Hinds. The program expanded to the Vicksburg Warren Campus in 2015. The program, a Mississippi Works Partnership between Hinds and the two school districts, is ending for the 2017-18 term.

Students had to read on an eighth-grade level and pass the college’s placement test for full participation. Classes in reading, math, college skills and other subjects are then aligned for the level at which they would have been taken in a traditional high school setting. 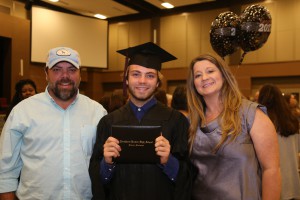 “Being in the program taught me time management,” said Nicholas Hydrick, of Northwest Rankin High School, who earned 22 credits toward college. He was equally thankful to program officials he described as “three amazing women.”

“I’m truly thankful God put these three women in my life,” he said on stage as he, Barrett and fellow RCSD students Shelbie Cranfield and Maeghan Romo in sharing brief testimonials about their experiences in the program. “I never would have graduated without their help,” Hydrick said. “I want you to know that you three have reserved spots in my heart forever.”

The ceremony was again keynoted by Dr. Sue Townsend, superintendent of the Rankin County School District and member of the college’s Board of Trustees.

“There’s a freedom that you feel when you’ve accomplished a goal,” Townsend said. “When you walk out of here, you’re going to have a new sense of freedom and what it offers to you.”

Frazier thanked guidance counselors and others in the Rankin County School District for supporting the program from the start.

“We have walked this journey together,” Frazier said. 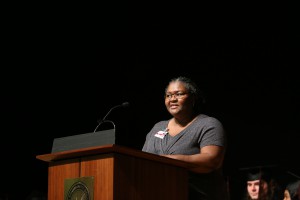 Beverly McClure, a guidance counselor at Northwest Rankin, told graduates they’d still be there for them as they continued their education at the college level.

“We’re here to support,” McClure said. “This is not work, this is easy. This is love. You still belong to your home school and every counselor in this district. And we want to help.”