RICHLAND – Byron Davis decided last year it was time for a change of life and career after years spent in low-paying jobs. What made his decision different from most…
By: Danny Barrett Jr.

RICHLAND – Byron Davis decided last year it was time for a change of life and career after years spent in low-paying jobs. 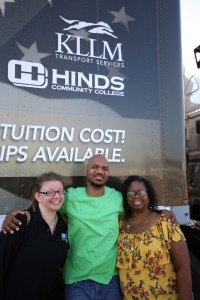 Byron Davis, center, completed the KLLM Driving Academy program this past summer and is now a lead solo driver with the company. With him are Charli Vos, an interpreter with the Mississippi Department of Rehabilitation Services, left, and Loretta Sutton, an interpreter and coordinator in Disability Support Services with Hinds Community College, right. (Hinds Community College/April Garon)

What made his decision different from most was a challenge he’d been overcoming for years – but with the help of a partnership between Hinds Community College and KLLM Driving Academy, he motored right past it and plans to keep on trucking.

Davis, 38, Southaven native, lost his hearing during childhood as a result of an illness. Since high school, he’d worked a series of jobs in shipping and receiving and in auto body work. “I wasn’t happy doing it,” Davis said through an interpreter. “The pay wasn’t enough for me and wasn’t enough of a challenge.”

After a friend recommended the KLLM Driving Academy at Hinds, Davis sought and qualified for a waiver from the state allowing him to apply for a commercial driver’s license. With the help of two interpreters provided by the Mississippi Department of Rehabilitation Services, he completed the program this past summer and is now employed as a lead solo driver with the Richland-based transport company.

“You really have to focus with it, and you can’t play around,” he said. “I feel good about myself for having passed the course.”

Hinds’ partnership with KLLM to train truck drivers at the company’s Richland headquarters and boost their ranks began in fall 2012. KLLM handles the training. Hinds handles the coursework. The facility itself opened in March 2014. 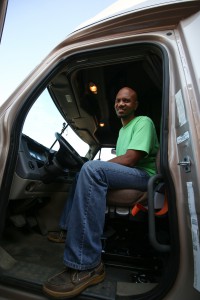 Byron Davis completed the KLLM Driving Academy program this past summer and is now a lead solo driver with the company. (Hinds Community College/April Garon)

“Byron was determined to provide for his family and fulfill his dream of becoming a truck driver,” said Josh Denson, manager of the KLLM Driving Academy and former disability examiner with MDRS. “He was able to accomplish all of these things through the opportunity provided by Hinds Community College and KLLM Transport Services.”

Davis credited the company and the Disability Support Services department at Hinds for taking care of the little things – such as the company paying for his bus ticket to town, helping to learn his schedule, and other things to “help get settled in”, he said.

“It’s been quite the partnership between Hinds, the Department of Rehabilitation and KLLM,” said Loretta Sutton, interpreter and coordinator in the college’s program that assists people with various physical challenges achieve their educational goals. “The three of us have been working together to make sure he’s very successful in this program.”

That success figures to have him on a fast track to a solid new career.

“My instructors have had a positive effect on me,” he said. “Some of them didn’t know anything about working with deaf students, but one of my instructors rode with me and learned some basic sign language so he can communicate with me.

The next major mile marker for Davis is obvious.

“I’d like to become an independent driver and own my own truck,” he said.