The kitchen is a diverse, popular place these days, particularly in television and social media. But there’s plenty of room at the tables served in the economy. Careers in food…
By: Danny Barrett Jr.

The kitchen is a diverse, popular place these days, particularly in television and social media. But there’s plenty of room at the tables served in the economy.

Careers in food can lead students to several diverse lines of work, from restaurants to food management. In the case of Hinds Community College Utica Campus student James Chapman, it’s a way to keep his options as versatile and varied as his interests. Although he left the farm to attend college, farming is still close to his heart.

“My grandmother and mom both grew up cooking,” said Chapman, a first-year student from Carthage. “They grew crops and lived off the land, lots of greens, different vegetables and fresh food. Even with meat, they had pigs, cows and such.

“At first, I wanted to do weapons engineering for the military,” he said. “But I had talked to a recruiter for the military who told me how much they love cooking because they need an escape. I found out about the culinary program here, and I’m glad I joined it.”

Chapman was among a dozen students in instructor Durnitra Weeks’ class in the Culinary Arts program at the Utica Campus in the fall 2015 semester. The Utica Campus, formerly Utica Junior College, retains its HBCU (Historically Black College and University) status. The campus is home to 14 career-technical programs including Weeks’ class. 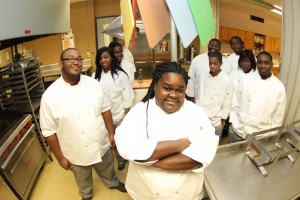 “The Hinds Utica Campus Career-Technical Division is proud of the growth we’ve seen in the past year,” said Kenisha Shelton, dean of career-tech programs at the Utica Campus. “Our instructors have been working extremely hard this past year to recruit and retain students and to obtain certification for themselves to stay relevant and connected with industry. The Career and Technical division at Hinds Community College – Utica Campus is definitely turning vision into reality.”

Registration for spring 2016 is ongoing; classes begin on Jan. 11. For information about enrolling in the culinary arts program, go to the Hinds website at www.hindscc.edu or call Weeks at 601.885.7114.

“We start out covering the basics – how to boil water and the correct temperature in which to cook certain foods,” Weeks said. “Then, comes the sanitary part, which is cleaning the kitchen according to health standards. Later, we cover seasoning and flavoring techniques with meat and other things like that.”

Weeks, a Bolivar County native and former executive chef and dietary manager in the healthcare industry, herself chose a cooking career over healthcare since it was second nature from an early age.

“I’m from a family of four cooks,” she said. “So, the passion came from watching them and for the enjoyment on their faces.”

Students enrolled in culinary programs at all of Hinds’ locations also learn about the connection of the program to hospitality and tourism. The college’s Hospitality and Tourism Management Technology degree program includes culinary, hotel, travel and tourism concentrations. 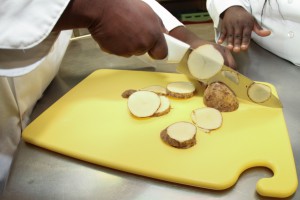 “In the Culinary Arts program on the Utica Campus, students receive hands-on training by an experienced chef,” District Director of Enrollment Kathryn Cole said. “Skills are built from the ground up – from simple boiling techniques all the way to working with specialized equipment and ingredients.”

Chapman is keeping his career options open, but both are straight out of the kitchen.

“I have two paths right now. One of them leads to be a culinary specialist in the Navy, and another is finding an apprenticeship for a restaurant, catering or food safety. With that, I’d like to stay in Mississippi.”