RAYMOND – Megan Bergeron knew it was time to get back in school once she saw the cost of not having a job with health insurance benefits. “I’m here because…
By: Danny Barrett Jr.

RAYMOND – Megan Bergeron knew it was time to get back in school once she saw the cost of not having a job with health insurance benefits.

“I’m here because I’ve realized the value of having it,” said Bergeron, 30, of Clinton, who will study Respiratory Care Technology at Hinds Community College this semester. 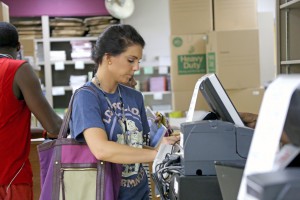 Bergeron plans to take her studies into a healthcare job she already knows something about.

“My aunt is a respiratory therapist, so I’m trying for something in a hospital setting,” she said.

Also moving toward a healthcare career, one class at a time, is Taylor Conway, also of Clinton. 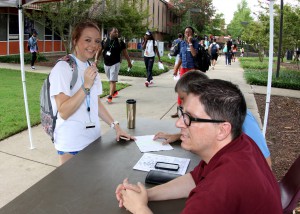 “I’m in my third semester,” said Conway, studying to be a dietician. “It doesn’t get that much harder as much as every class is just different.”

Godey Coleus was used to imposing his will on opposing ball carriers during his high school football days in Tampa, Fla. As his five-class schedule of studies approached, the defensive lineman prospect spoke of continuing that part of his life and little bit more.

“I’m studying business administration,” said during a break between classes. “I want to start my own company or look into banking or finance.”

Blair McIntosh’s quest for notebooks ended successfully in the campus bookstore – a result he hopes to duplicate in his studies.

“I’m going into computer science,” said McIntosh, a Chicago native and two-year Jackson resident. “I’m undecided on if that’ll be in networking, programming or tech support, but it’ll be in computers.”