The City of Raymond presented a resolution to Hinds Community College President Dr. Clyde Muse in honor of the college’s Centennial celebration. The resolution, passed unanimously by the Board of…
By: Cathy Hayden

The City of Raymond presented a resolution to Hinds Community College President Dr. Clyde Muse in honor of the college’s Centennial celebration. The resolution, passed unanimously by the Board of Aldermen, was presented to Muse by Alderman Jack Moss on Sept. 9 at the annual Raymond Country Fair. 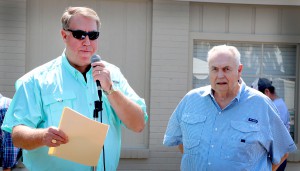 The resolution acknowledged the intertwined history of the college and the city as well as Muse’s tenure as president.

“I’ve enjoyed the 40 years I’ve been here and been a part of the Hinds Community College family. We’ve enjoyed being a part of Raymond all these years,” Muse said

If it weren’t for the City of Raymond’s desire to be the home of a boarding agricultural high school in the early 1900s, there might not be a Hinds Community College today. When the state Legislature opened the door with seed money to create schools to educate rural high school boys and girls, Raymond jumped at the chance.

With its central location and offer of land and other support, Raymond won a county school board’s approval over several other towns in May 1916.  The town issued bonds in the amount of $5,000 and, on Feb. 8, 1917, paid $2,000 to Raymond Mayor A.H. Sivley and his wife for about 45 acres of land, partly within the corporate limits of Raymond, but mostly to the east.

Then with $75,000 in funding from the Hinds County Board of Supervisors, construction began on three brick buildings: a two-story dorm for females, a three-story administration and classroom structure, and a matching two-story dorm for males in that order on a semi-ellipse on the north side of the Raymond-Jackson highway.

Beginning on Sept. 2, 1917, a week before the beginning of the fall term and with no students on campus, the AHS hosted the annual convention of the State Conference of Teachers with attendees allowed to board in the new dorms. A week later, on Sept. 9, 1917, Hinds County Agricultural High School Superintendent W.N. Taylor greeted 117 students.