RAYMOND — Part of the music for the occasion of Hinds’ Centennial comes courtesy of a budding composer whose talent was arranged on the Raymond Campus. [tweetable alt=””]Tonight’s Centennial concert[/tweetable]…
By: Danny Barrett Jr.

RAYMOND — Part of the music for the occasion of Hinds’ Centennial comes courtesy of a budding composer whose talent was arranged on the Raymond Campus.

[tweetable alt=””]Tonight’s Centennial concert[/tweetable] features the Hinds Wind and Percussion ensembles, the Delta State University Wind Ensemble, and a combined brass band between the two schools. The program also features a work by that talented young composer, Warren Ertle, who earned a degree from Hinds in 2012. His piece is titled “Beneath the Magnolias” and was commissioned by Music Chair and Director of Bands Shane Sprayberry last spring. As Ertle puts it, it has a “Mississippi theme.” 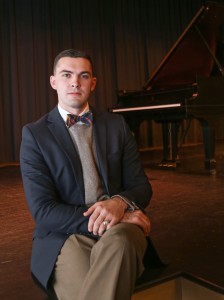 “The instrumentation is for a full wind ensemble. Anyone who’s been around Hinds for any length of time can be prepared to be entertained by it,” Ertle said. “It’s got high energy in some parts, but also has slower lyrical parts. It has about everything you’d want in a five-minute piece.”

Works by nationally-known composer/musicians Ivan Trevino and Kevin McKee round out the program. The music starts at 7 p.m. in Hogg Auditorium at Cain-Cochran Hall. Admission is free.

The concert is but another way Ertle’s composition talents have been put “out there” in the classical music world. His compositions for piano and marimba have been performed by some of the best in Mississippi, including the Jackson Metropolitan Chamber orchestra and the Mississippi College Symphonic Winds.

The Terry native credits his time in the Eagle bands for helping turn a budding passion for music into a career pursuit.

“A lot of folks just try to get their core credits out the way at Hinds or any community college,” he said. “But, I didn’t – I declared music as my subject right from day one. The music department will help guide you along the way, even if you’re just starting out and not sure about music. They can guide students and help them figure out whether music is for them or not.”

A prized pupil’s work was a natural choice when it came time to commission a piece for the Centennial Concert program. 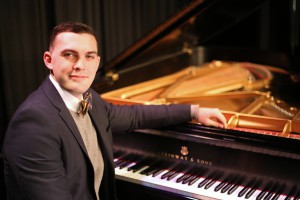 Warren Ertle sits at the piano

“Warren is an amazingly talented musician and composer,” Sprayberry said. “It was an honor to have him as a member of the Hinds Eagle Marching Band, Wind Ensemble and Music Department.”

These days, he works at Jackson Prep accompanying the school’s show choirs on piano while staying in good musical shape taking composition classes at Mississippi College while working toward a master’s degree. His musical chops stay sharp as a pianist and percussionist for the 41st Army Band in Jackson. His fiancé, mezzo-soprano Jamie Ferguson, is pursuing hers at the Boston Conservatory.