Continental Tire executive Paul Williams knows his audience well when talking with students fresh out of high school and looking for careers.

He can’t help the familiarity, really – he was once one of them.

“I finished school at 16 in the UK (United Kingdom), then I went full-time to a technical community college doing mechanical and production engineering,” Williams said. “So, I started doing what you all are doing.” 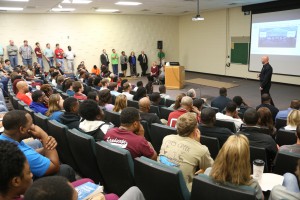 Williams, an executive vice president for the global tire maker and automotive supplier’s commercial vehicle tire operation in the Americas, built his career in the industry from a classroom not unlike the lecture hall at Reeves Hall on Hinds Community College’s Raymond Campus, where he spoke to students and others during a visit April 12 to Hinds’ career-tech facilities.

“My first employer came into the college and asked, ‘Who’s the best practical guy? Who’s your best welder and who’s your best machinist?’ Well, that was me,” Williams said. 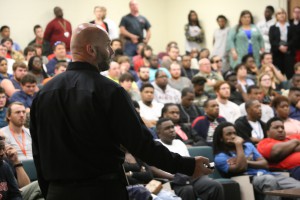 A four-year apprenticeship followed as he earned his associate’s, then a bachelor of science in engineering and then later an MBA. Williams began his career in the manufacturing industry as operations manager at Aerolux, moving on to the role of production and purchasing controller for Nissan Motors in the United Kingdom.

In 2001, he joined Continental AG as purchasing manager for the power and transmission group of ContiTech, a world-leading manufacturer of rubber and plastics technologies. In his current role at Continental, Williams is responsible for original equipment and replacement sales of truck tires in the Americas, encompassing the major markets of the United States, Canada, Mexico, Argentina, Brazil and Ecuador.

His visit to Hinds included stops at career-tech classrooms on the Raymond Campus, Eagle Ridge Conference Center, the Rankin Campus’ Career-Tech building on Greenfield Road and meetings with college and state officials. 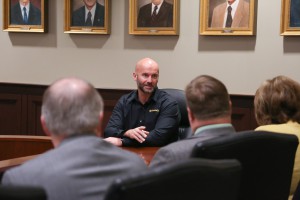 “It was very productive to hear directly from the Continental executive who could articulate training expectations and a timeline,” said Hinds President Dr. Clyde Muse. “We appreciated even more Mr. Williams’ desire to meet with our students and to encourage them to consider a career with Continental.”

Williams said the company will start clearing land this year, then begin major construction on a plant that is to be production-ready by 2019. Once completed, Williams said, the $1.45 billion plant will move quickly to a capacity of 1.1 million tires produced annually, and later to accommodate the company’s passenger car division.

“As that plant grows, you’ll have more and more career opportunities – supervisors, managers, team leaders, all that will encompass that plant,” he said.

Many of the 2,500 jobs the company has said will result from the plant’s construction are highly skilled, technical positions where training in modern-day factory equipment is a must, Williams said.

Students agreed having a big-time job creator in central Mississippi is a positive.

“I think it’s a good thing for the community and will bring a lot of money to the area,” said Wayne Lewis, a sophomore Heating & Air Conditioning student from Amite, La., now living in Mississippi.

“It seems like it would be a good opportunity to grow with a company with good benefits,” said Viory Frazier, of Terry, a carpentry student who already holds a bachelor’s degree in business management.

Advanced training for those hired would take place here in Mississippi and be supported by the company’s facility in Mount Vernon, Ill., Williams said.

“If you go into our curing room there, which is where you ‘cook’ tires in the press, it’s fully automated and all robotic,” he said. 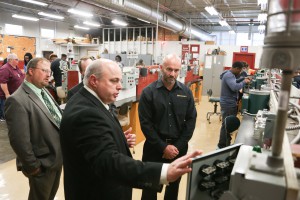 Workforce development programs such as Industrial Maintenance and Electrical Technology are geared to move the best potential employees for industries in the state to jobs. Assessments of companies by the college’s workforce team are often “industry-specific” and flexible enough to pinpoint precisely what a company’s staffing solutions might be, said Vice President for Workforce Development Chad Stocks.

“We know what companies are looking for in an employee,” District Director of Manufacturing Training David Creel said. “They’re looking for a team player, someone who communicates, has above average dedication, has enthusiasm and has the right attitude for change.”

“The meeting with Mr. Williams was very productive,” Muse said. “It was our opportunity to hear directly from the industry executive who is defining expectations for training and employees. I have great confidence in the Hinds team tasked with meeting those expectations.”

It’s a commitment to being the best possible employee that Williams imparted to the packed roomful of students.