RAYMOND – The Hinds Eagle Band’s newest assistant has a love for music that grew out of another traditional youth activity. “I had an older friend in my Boy Scout…
By: Danny Barrett Jr.

RAYMOND – The Hinds Eagle Band’s newest assistant has a love for music that grew out of another traditional youth activity.

“I had an older friend in my Boy Scout troop who played trumpet,” Bullock said. “I thought it was cool, so I decided to do it, too.”

Ben Bullock of Byram began July 1 as the band’s newest assistant director. He succeeds Robert Cheesman, who retired. He also instructs the high brass section of marching and concert bands at Hinds, which includes the trumpet and French horn players. 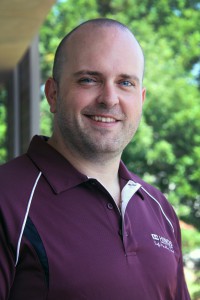 A Tupelo native, he came to Hinds Community College from Lewisburg High School in Olive Branch. Previously, he directed and assisted bands at Milam Intermediate School in Tupelo and Kosciusko Middle School.

He holds an undergraduate degree in music education from the University of Southern Mississippi. His master’s is also from USM, in trumpet performance.

Bullock will work to develop the high brass studio, or section, in the concert, marching and jazz bands, Band Director Shane Sprayberry said, adding this year’s band features about 150 members.

Recruiting high school musicians who want to carry their tunes to college is job one for both men.

“I want to make Hinds a sort of place where people who will major in this will want to come here,” Bullock said. “I’d like to make it grow.”

The band performs, along with the Hinds Hi-Steppers precision dance team, at each home football game, Aug. 27, Sept. 3, Sept. 17, Oct. 8 and homecoming on Oct. 15 as well as numerous other parades and performances.