Fruits of the labor of Hinds Community College sophomore Javadric “Jay” Kelly could be showcased Dec. 19 as Lifetime’s “Bring It” reality show is set to tape at Hinds’ Utica…
By: Cathy Hayden 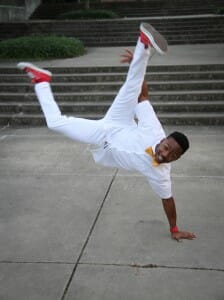 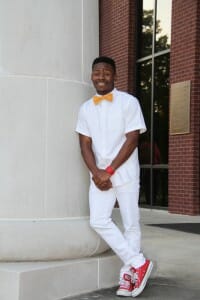 Fruits of the labor of Hinds Community College sophomore Javadric “Jay” Kelly could be showcased Dec. 19 as Lifetime’s “Bring It” reality show is set to tape at Hinds’ Utica Campus.

Kelly, 21, is a dance student on the Raymond Campus and manager for the Hi-Steppers dance team. He is one of the hip hop choreographers for Dianna Williams’ Dancing Dolls, the featured Jackson team that competes with other teams on the reality series entering its third season in January.

Kelly of Bolton and his buddy Timothy Jones have been dancing together 10 years. Jones had previously done some choreography for Williams, known as Miss Dianna on the show. When she called him to choreograph for the show, Jones stipulated that he and Kelly are a team.

“I teach hip hop to the girls and I help assist Miss Dianna. When she needs some new moves or new ideas, she calls me or my friend Tim,” Kelly said.

He has been dancing since he was 3 years old and is self-taught, but has learned technique in his Hinds classes taught by Tiffany Jefferson, director of Montage Theatre of Dance.

“I learned by watching Michael Jackson, James Brown, Chris Brown, Omari, everybody. I just started doing stuff they were doing,” he said. “But once I got to Hinds, Tiffany Jefferson taught me to get better technique – tap, jazz, ballet, modern, all those type dance genres.”

Jefferson said she first met Kelly when he was in the eighth grade through his work in a dance company.

“Anyone could tell then that he was destined to be a great performing artist. Javadric Kelly has boundless energy and talents. His charisma alone is so infectious, one can’t help but to fall for him,” she said. “Since he has been under our direction at Hinds, he has been very open-minded to learning any and everything about the art form of dance. He takes his craft very seriously even if he doesn’t take himself so seriously. He is very playful, but he is no nonsense about his dancing.”

“Bring It” will tape Saturday, Dec. 19 at J.D. Boyd Gym at Hinds Community College’s Utica Campus. The doors open at noon with the show beginning at 2 p.m.

“When ‘Bring It’ first came out, we were always behind the scenes with the girls but we never received any recognition for it. Season 2 is when they started adding us into the shows and letting us be a part of the episodes,” Kelly said. “Me and Tim had a whole episode to ourselves when we came in and taught the girls a hip hop routine. They won first place. Season 2 we danced in the season finale. She (Williams) utilized us as the secret weapons, and they won first place as well.”

Kelly said being involved with the production and teaching the Dancing Dolls is fun. “I love working with the Dancing Dolls,” he said. “We are in a roomful of young ladies who are very, very talented, diverse and versatile. It’s kind of fun dealing with all the personalities. They catch on real fast so that makes the job even easier and funner. They have these great, goofy, enormous personalities that I love, and they have enormous energy.”

Kelly and Jones aren’t paid for the work they do with “Bring It,” but it has led to some paid outside gigs, both performances and teaching.

It has also led to some recognition. When he and Jones were at Disney World, he heard passersby say, “‘Oh, my God, there go Tim and Jay.’ This is really real. They knew us, he said. “It opens plenty of doors for us.”