[tweetable alt=””]Hinds Community College President Dr. Clyde Muse was honored with the Distinguished Citizen Award[/tweetable] by the Andrew Jackson Council of Boy Scouts of America at a dinner that raised…
By: Cathy Hayden

[tweetable alt=””]Hinds Community College President Dr. Clyde Muse was honored with the Distinguished Citizen Award[/tweetable] by the Andrew Jackson Council of Boy Scouts of America at a dinner that raised a record $52,500 for the council. Muse has the nickname of the “godfather” of the Mississippi community college system.

Anthony Haines, CEO/Scout executive for the Andrew Jackson Council, thanked Muse for participating in the Aug. 30 event at the Hilton in Jackson that raised more money for the council than has ever been raised at this event. 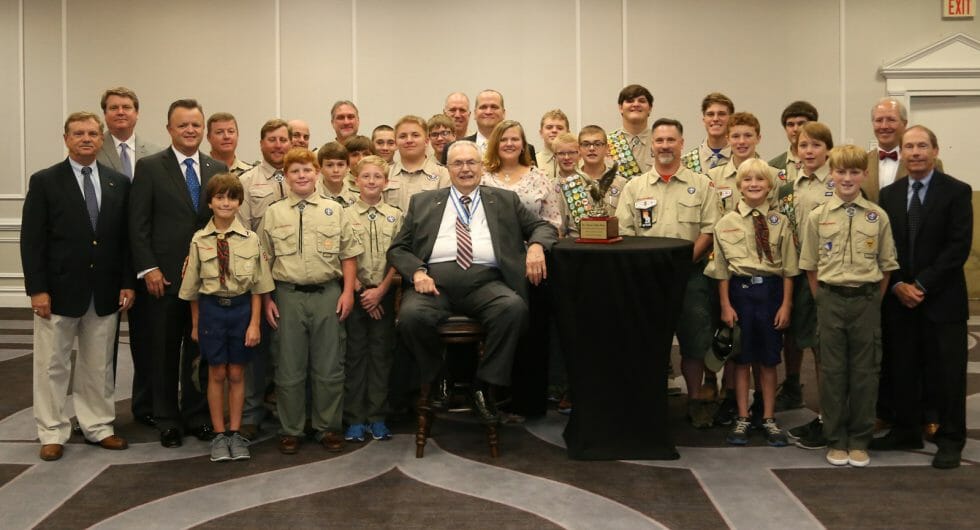 Muse was also recognized by the Boy Scouts in 1988 with the Silver Beaver Award, a council-level distinguished service award. In June 2015 received the Whitney Young Service Award along with his friend Dr. Robert Smith.

“I was a Scout in my earlier days, and I enjoyed scouting. It meant a lot to me as I grew up,” he said.

“It is because of the nurturing care that he provides that we affectionately and reverently call him ‘godfather,’” he said. “Or it could be that, when he enters the room, all of us who are his peers stand and salute and get in line to kiss the ring. We have seen many others do that also, especially in elected positions and those seeking favor from his wide influence.”

Cole said Muse’s influence extends not only within Mississippi but outside the state.

“Originally there were only two people in Mississippi known by their first names. If you called the first name you didn’t have to call the last name. One was Elvis; the other one is Clyde,” Cole said. “If you walked in the state Capitol, looked around and asked anybody, ‘Has Clyde gotten here yet?’ they would tell you because they knew exactly who you were talking about. Whether it was a porter, whether it was a housekeeper or whether it was the governor.” 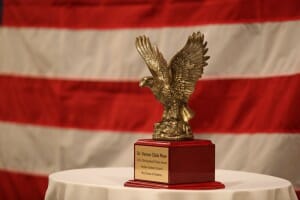 Jackie Granberry, vice president for Advancement at Hinds Community College, said she read over the Boy Scout oath and found that Muse lives out its words.

“Clyde Muse is definitely a man of honor, dedicated to serving God and helping other people at all times,” she said. “He still rises at 4 a.m. each day and heads to the Wellness Complex, where he pursues his lifelong commitment to be physically strong and mentally awake. He has been challenged with difficult circumstances, yet he has remained morally straight.”

Granberry said when she asked Hinds employees for one word to describe Muse, the words she was told the most were “caring” and “compassionate.” 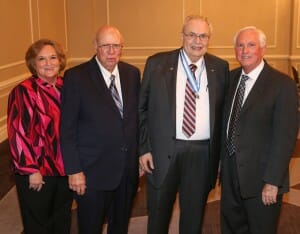 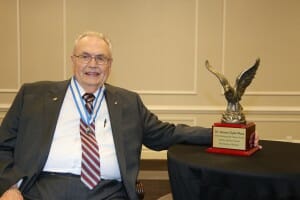 Ted Kendall, chairman of Gaddis Farms and former president of the Hinds Community College Board of Trustees, recalled his long years of friendship with Muse that began when Muse was superintendent of Hinds County schools and the two of them served on the board of Hinds Junior College.

When then-college president Dr. Robert Mayo announced his impending retirement, Kendall visited the Muses in Meridian and persuaded him and the late Vashti Muse to return to Hinds County.

“I’m proud to say he became the sixth president of Hinds Junior College in July 1978. He has exceeded all of our expectations,” Kendall said. “He’s been a major fundraiser for the local scouts and now tonight for the entire Andrew Jackson Council.”