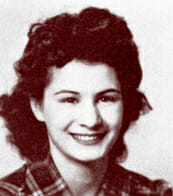 But the name of this highly intelligent and somewhat eccentric Rankin County native will likely be well known to many Hinds students in the future because of what she did for them.  Schales made a bequest of about $2 million to Hinds Community College — the largest single gift to the Hinds Community College Foundation since its inception in 1978.

When Schales died in November 2012 at the age of 89, she left the college an estate of about $2 million, which will create the Elizabeth Lloyd Schales Endowment for Excellence aimed at higher achieving students.

Elizabeth Lloyd was a Hinds Junior College student in 1942 and 1943, finishing her degree at Millsaps College.

She met her husband, Dr. Otto Schales while working as a chemist in New Orleans.

In 1944, he was hired as director of the first research laboratory at the Oschner Clinic. He also worked with the Department of Biochemistry at Tulane University School of Medicine in New Orleans and was a founding member of the Journal of Clinical Chemistry.

The Schales family then moved to Ohio, where he was responsible for the chemistry lab at Elyria Memorial Hospital.  After he retired, they moved to Columbus, Ohio, where he died in October 1988. Otto and Elizabeth Schales had no children but did a lot of traveling.

Elizabeth Schales renewed her relationship with Hinds in 1996 with a $10 gift to the Hinds Community College Foundation.

After Hinds’ landmark Cain Hall burned in 1998, the Foundation mounted a capital campaign to rebuild. No one at Hinds really knew Elizabeth Schales but because of the $10 donation her name and address were in the database.

One day Schales called the phone number on the Hinds capital campaign materials she had received, getting Carraway on the line.

“We just began to talk, and she started to cry, talking about Hinds. It was those memories and good friends she had had here,” Carraway said. “We talked about Cain Hall, and apparently it was such a strong memory she sent $1,000, then $10,000, then another $10,000.”

Over a three-year period, Schales gave $31,000 to the campaign to build Cain-Cochran Hall, which was officially dedicated in November 2002.

Carraway and Schales maintained a relationship over the years. Carraway visited her twice in Ohio during travel for other reasons and spent the night at her house. She was well read, keeping up with world events and the news. Carraway said.

Then in 2000 Schales sent a copy of her will to the college, showing that she intended to leave her estate to Hinds. “We didn’t know if she had a lot of money or not,” Carraway said.

Schales established her scholarship in 2001 with a $15,000 endowment for Hinds students who demonstrate academic achievement and promise with a preference for those interested in science.

In 2003, she moved back to the Jackson area where she had a sister. “We continued to visit more frequently,” Carraway said. “She was very sweet. She was extremely intelligent.”

After Schales death in 2012, the college learned just how much she planned to give the college — about $2 million. “A significant number of scholarships will be awarded in the coming year from this fund,” Carraway said.