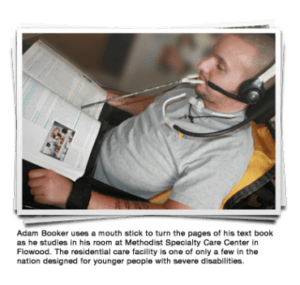 The first time Adam Booker went to college, he mostly majored in having fun.

“I thought I was doing good by just getting up and going to class,” he said. “I’d roll out of bed, put on sweatpants, brush my teeth and just make it out the door. It was easy.”

Now, it takes 30 minutes and the help of a certified nurse’s aide to ready Booker for classes at Hinds Community College in Pearl. Yet the 25-year-old quadriplegic is a better student than he ever was as an able-bodied 18-year-old.

“You know what they say … you don’t appreciate something until you’ve lost the opportunity,” said Booker, who was paralyzed from the neck down in a 2006 car crash. “Then, I was not holding myself to the standard I am now.”

Today, Booker has a 4.0 average after completing 31 hours of course work. And that impresses professors like Hamilton Wise, chairman of the biology department at Hinds’ Rankin County campus and Booker’s instructor for Anatomy and Physiology.

“I got a charge out of him being here, working to make something of himself despite the setbacks he has had,” Wise said. “He’s a very good student, one of only two in that A&P section to have an A It is extremely difficult for him to do anything. Yet he isn’t at all inclined to be part of a pity party.”

It’s not that Booker didn’t think about “going crazy” after doctors delivered a grim prognosis. “I’ve kind of been waiting for that reaction,” he said. “I even told my dad I’d like to get mad at somebody and go off the rails. But I guess I don’t have it in me. I think if your reaction will have nothing to do with the outcome – good or bad – why waste your energy?”

While his parents wanted Booker to return to college, he spent much of the first year after his injury watching TV at his dad and stepmom’s house in Ridgeland.

In 2007, he moved to Methodist Specialty Care Center in Flowood, a division of Methodist Rehabilitation Center (MRC) in Jackson. The residential care facility is one of only a few in the nation designed for younger people with severe disabilities. And staff there recognized Booker had the potential to excel. “I had two nurses who stayed on my butt about college,” he said.

“I more or less harassed him,” said Charlene Perez, a licensed practical nurse at the residential center. “I told him about a patient I once had through home health that was injured like him. He ended up going to school. He got married and became a lawyer and a judge. I said there was no reason he should sit up here doing nothing when there were things he could do.”

The good-natured nagging pushed Booker to explore his options, and he started at Hinds’ nearby Rankin campus the spring semester of 2011. “The teachers have been very receptive and accommodating,” he said.

While Methodist has experts who can assist with the adaptive computing needs of center residents, the already tech-savvy Booker didn’t require much help. As he reads, he uses a mouth stick to flip pages. And when papers are due, he relies on software to translate speech into text.

In class, he turns to personal aide Mary Boyd of Madison to take notes and write his answers during tests. “Basically, I’m his arms,” Boyd said. And if the truth be known, he has stolen her heart as well. “I adore the guy,” she said. “He really enjoys what he is learning. He wants to be a psychologist, and I think he has a calling for it.”

Certainly he can empathize with those who have endured great loss and lived with regrets. Booker now wishes he had been more responsible during his freshman year at the University of North Carolina-Charlotte. “I had everything going for me, and I was more focused on having a good time,” he said.

Booker had dropped out of school and was working in Lenoir, N.C., on the February night he turned in front of a motorist just topping a hill. “He hit me in the passenger’s side,” Booker said. “I wasn’t wearing a seatbelt, and it chunked me about in the car.”

The crash fractured his neck and paralyzed every muscle below the break – including those that control breathing. “I lost all my vitals and crashed dead on the scene,” he said. “I don’t know how they revived me. I crashed again in ICU. When I came back, I had all these people hovering over me screaming in my face.”

Ordinarily, someone with Booker’s injury level would be tethered to a ventilator. But he breathes with the help of an implanted pacemaker that electrically stimulates his diaphragm. “It was experimental at the time,” he said. “I think I was the 26th person to ever get one.”

Even with the less conspicuous breathing system, Booker said he is self-conscious at times. And although his tattooed forearms, trendy shoes and closely-shaven head make him look like many of his peers, he wondered how he would fit in with others his age on campus. “When they first see me coming, I don’t think they see me – just this rolling wheelchair,” he said. “They don’t know how to react, what to say or if I’m all there mentally.”

But now that he has a few semesters under his belt, Booker said he is beginning to feel more accepted. And he looks forward to the interaction in his current psychology course. “The professor has gotten everyone involved by asking us questions. And I think this might be my first chance to open up to people. They’ll finally hear my story,” he said. Until then, the Cliff’s Notes version is inked on Booker’s left forearm. His tattoo says: Positivity will overcome adversity.