3 Speakers to address graduates May 16-19

Two speakers have been named for the May 16 and 17 Raymond Campus graduation ceremonies at Hogg Auditorium in Cain-Cochran Hall. A third speaker will address the Utica Campus graduation…
By: Cathy Hayden 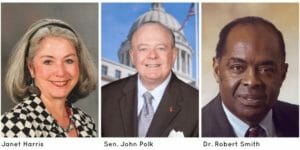 State Sen. John Polk is speaking to all other academic, career and technical graduates at 10 a.m. and 2 p.m., Friday, May 17.

Dr. Robert Smith will speak to all Utica Campus graduates May 19 in the J.D. Boyd Gymnasium on the Utica Campus.

Janet Harris – With 39 years of nursing experience, most of which has been in management at the University of Mississippi Medical Center and Baptist Health Systems, Harris currently serves as CNO and Interim CEO for UMMC. She is adjunct faculty, teaching in the Leadership Course, Doctor of Nursing program, in the UMMC School of Nursing, and recently completed her Doctorate of Nursing Practice in the executive track at the University of Pittsburg. Active for many years in community and professional organizations, Harris recently completed four years on the Congress of Nursing Practice and Economics and as a Magnet Commissioner with ANCC. She currently serves as the president of the Mississippi Nurses Foundation.

Sen. John Polk – Originally from Prentiss, Polk serves District 44 representing parts of Forrest, Lamar and Perry counties. He is a graduate of the University of Southern Mississippi with a bachelor’s degree in communications. In 1974 he and his wife bought their current business, Polk’s Meat Products, Inc. Polk is currently chairman of the corporation. Polk was elected to a four-year term in the Mississippi Senate in 2011. In August 2012 Lt. Gov. Tate Reeves appointed Polk as chairman of the Senate Universities and Colleges Committee. Other committees he has been assigned to are Accountability, Efficiency and Transparency; Education; Elections; Energy; Finance; Housing; and Ports and Marine Resources. Lt. Gov. Reeves has also appointed Polk to the Advisory Board of the College Savings Plan of Mississippi.