PEARL – Dr. Ray Morgigno felt the importance of an education not with the sound of paper and pencil, but with the snap of a part on his once-cherished muscle car.

“I had a 1970 Corvette at the time I was in school and loved it, but it threw a rod,” Morgigno said. “I’ll never forget my dad saying, ‘If you think I’m going to pay for you to go to school and hot rod around, you have another thing coming.’ I had liked to play tennis, but that ended my tennis career and I had to get a job. But it was the best thing that ever happened to me.” 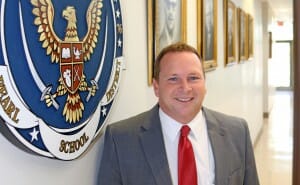 It spurred a love of the classroom and teaching, Morgigno said, which put him on a fast track to achieving a most gracious honor from his peers. The superintendent of the 4,200-student Pearl School District was named Superintendent of the Year in October 2016 by the Mississippi Association of Administrators during the organization’s annual conference in Jackson.

Morgigno is himself a product of the school system he leads, having graduated from Pearl High School. Attending Hinds after high school helped him mature, he said.

“I was one of six children and was the first to go to college,” he said. “What Hinds provided was an affordable opportunity to go to college. My parents were of the generation that thought if you graduated high school, you were a man, then. And then you just went to work and got married. With Hinds, my parents were able to pay by semester for me to become a teacher. I got there and I loved it.”

While at Hinds, he had worked his way through school at a Sears store. There, coworkers who were in the Mississippi Army National Guard talked up the benefits of joining. In 2011, he retired as a lieutenant colonel in the guard with nearly 22 years of service.

He was appointed superintendent in 2010 after four years as principal at his high school alma mater. His first foray into school administration was as assistant principal at Brandon High School, from 2000-06.

Fittingly, it was teachers who inspired him to pursue education as a career. That included Gary Fox, who taught his English Literature class at the Rankin Campus and is now academic dean, and Sheila Tedder, his high school English teacher who also taught at Hinds as an adjunct instructor.

“Ray always had an enthusiastic smile that reflected his personality and self-confidence,” Tedder said. “He was a humble, hard-working young man who set and achieved his goals.” Fox and Morgigno reconnected when the latter became chief and became involved in the dual enrollment program and added “a keen understanding” of student needs that proved invaluable, Fox said.

These days, he sees the value of a Hinds education from the opposite side of the desk from when he was a student. “Hinds has demonstrated outstanding community involvement through time,” he said. “The partnership we’ve had with Hinds as a school district has been very good, especially the programs for workforce training and with the kids who are dually enrolled.”