Lauren Eklund made it to most of her children’s soccer games in the fall and spring but so did her nursing school textbooks. She spent many a game looking up…
By: Cathy Hayden 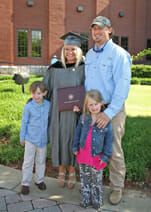 Lauren Eklund made it to most of her children’s soccer games in the fall and spring but so did her nursing school textbooks. She spent many a game looking up from a book and cheering on Austin, 6, and Avery, 5.

It was all worth it on Thursday, May 15, however, when the children along with husband Jay saw Eklund, 27, of Florence walk across the stage at Hinds Community College to receive her Associate Degree in Nursing.

It took “a lot of late nights, a lot of praying, a lot of coffee, a lot of good friends, a lot of support from family. I’m humbled,” she said. “It was a team effort, and I’m glad my kids got to see it.”

But those numbers don’t even tell the whole story. For the academic year that includes graduations in August and December 2013, preliminary data show Hinds is awarding 2,747 total degrees or other credentials to 2,257 students, some of whom have earned more than one credential, such as a career or technical certificate.

“Four years ago, we set out with a goal in mind, and that was to graduate a higher percentage of our students,” said Hinds President Dr. Clyde Muse. “Many students were completing their coursework, but they planned on transferring to a university so they didn’t see an associate degree to graduate as important. But there is a lot of direct evidence that shows the opposite of that, that it is very important.”

Muse said education has become even more important “for upward mobility, good jobs and to be able to make a good living to take care of their families in the future.”

Speaker Tim Moore, president and CEO of the Mississippi Hospital Association, reminded graduates that it’s all about “servant leadership.”

“If that’s not why we’re here, we certainly need to navigate to another position,” he said.

During his first job as a radiology technologist in a Meridian hospital, the first guy he worked with brought the point home.

“He comes in about 5 o’clock, invites me into an X-ray room and says ‘Get on the table.’ I lay down on the table. He says, ‘It’s hard, isn’t it.’ I said, ‘Yes, sir, it is.’ He said, ‘Don’t ever forget that.’ He said, ‘Treat everybody that lies down on this table like it’s your mother. If you do, you will do well.’ Truer words could never have been spoken,” Moore said. 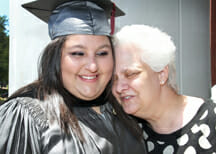 Meleka Kozam of Brandon exemplifies what Moore was talking about. She graduated with an Associate Degree in Nursing after working for nine years in an ambulance at American Medical Response. Sharing her day was Carol Fron of Raymond, who credits Kozam with helping to save her life a couple years ago.

“I was living for this day,” Fron said of Kozam’s graduation. “She is going to do well. There is nothing she can’t do.”

Kozam was on a team who responded to Fron’s 911 call when she fell 10 feet out of her attic, missing the steps. Fron hit her head and had massive blood loss but managed to call 911.

“There was blood everywhere,” Kozam recalls. “When somebody has to call 911, theoretically that’s the worst day of their life. They’ve lost control of everything. They need us to come in and make order out of chaos. That’s what we did.”

In appreciation, Fron invites the 911 responders to an annual crawfish boil. “There is not a safer crawfish boil on the planet when you have 911 there,” Fron said laughing.

Kozam plans to continue working on the ambulance at least part-time while seeking a nursing position, perhaps in an intensive care unit.

Hinds continues graduation exercises on Friday, May 16, at 8:30 a.m., noon, and 3:30 p.m. with doors to open at 7:30 a.m., 10:45 a.m. and 2:15 p.m. All Raymond Campus ceremonies will take place in Hogg Auditorium of Cain-Cochran Hall. Hinds County Supervisor Robert Graham is graduating at the 8:30 a.m. ceremony and is also the graduation speaker. Malcolm White, director of tourism for the Mississippi Development Authority, will speak to graduates during the noon and 3:30 ceremonies.

The Utica Campus graduation ceremony, which also includes Hinds Agricultural High School, will take place at 2 p.m. on Sunday, May 18, in the J.D. Boyd Gymnasium. Congressman Bennie Thompson is the speaker. It’s the last joint graduation for the Utica Campus and Hinds Agricultural High School because the high school is closing after this academic year.