RAYMOND – The struggle has been real for Gena Barlow long before the concept became a popular talking point. 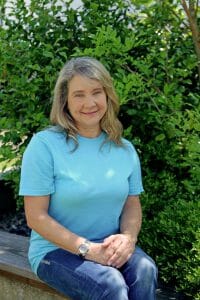 “I was diagnosed with dyslexia at the age of six,” said Barlow, who grew up around the Byram and Terry area. “Back then, there just wasn’t much you could do about it.

“I had a problem keeping up in school. I’d stay up all night studying, but I just struggled with it so bad. With dyslexia, you’re still as smart as everybody else. It just takes a little longer to get it. When you get older, you then have so much more life experience to draw on, so your mind has calmed down.”

The 54-year-old mother of five left high school early, but earned a GED a few years later. To support her family, she learned bookkeeping from her own mother and managed apartments and other rental properties.

“I really wanted to go back to school, because I could hardly support myself since I lived on the properties,” she said. “I just had a fear of failing, and I was busy being a mom.”

A leasing agent at her last apartment complex, who was also attending college at the time, persuaded her to go back to school.

“I was nervous about taking notes, but she just said, ‘Nah, they have people now who can take notes for you.’ I just said ‘Wow’!”

Two years later, Barlow finds herself achieving things in school she thought weren’t meant for her. She’s attending Hinds on the Excellence in Career-Technical Education Scholarship, which has helped tremendously in paying for her continuing education. She’s been inducted into the Gamma Lambda Chapter of Phi Theta Kappa on the Raymond Campus and is on track to earn an Associate of Applied Science degree by spring 2019.

She chose to focus on carpentry based on a previous try at a career in real estate brokerage.

“I’ve always liked working with my hands and like to fix things myself,” she said. “I’ve worked around real estate and property management, so now I want to start making money by building the houses myself.”

Her experience at Hinds far exceeded all her initial expectations about going back to school.

“The help I got getting through my first few classes is how I got here,” she said. “I wouldn’t have made those grades to get the scholarship. And I had no idea what Phi Theta Kappa was at first – I thought it was a sorority! But having an honor society on your resume will get you into so many things after school.

“I have loved it because everybody is so nice. I just can’t say enough about the instructors and the people here.”