Writing Center a house of peace for JATC student

A safe, quiet place to escape her circumstances and express herself is what Jessica Bradford had yearned for since she was a young girl. “Writing has always been therapeutic for…
By: Danny Barrett Jr. 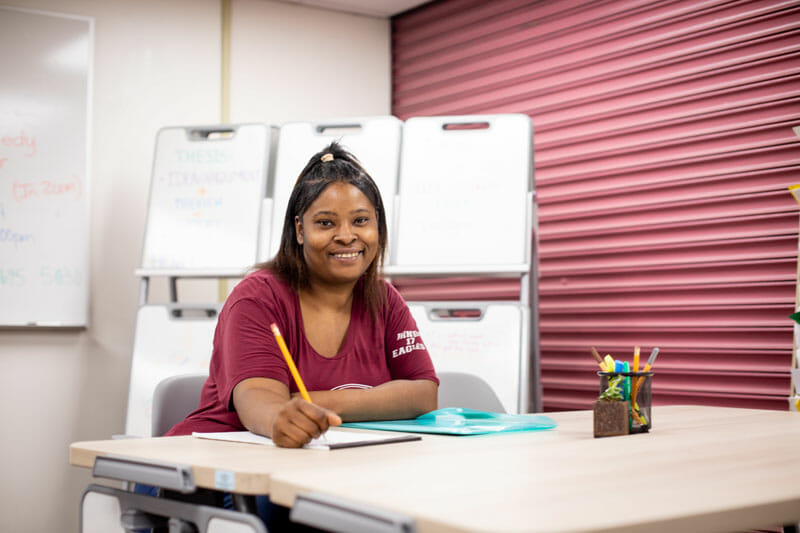 A safe, quiet place to escape her circumstances and express herself is what Jessica Bradford had yearned for since she was a young girl.

“Writing has always been therapeutic for me,” Bradford said. “In some families, certain things get swept under the rug and not talked about. So, that’s how I grew my love for it. At Hinds, I’ve found a place to do just that.”

Bradford, 33, of Jackson, will have taken the long way to earning a college degree, which she’s on track to do this semester at Hinds Community College. She finished school only to the eighth grade, then earned a GED in 2013 and returned to school in 2014 after years of working a variety of jobs in retail, hospitality and private security.

“I grew up in a house of domestic abuse,” she said. “My mom left my brothers and me when I was 12, so I had to grow up very early. I had to learn how cook and do household things. I didn’t get all the opportunities other children get. Still, I’ve always loved helping people. 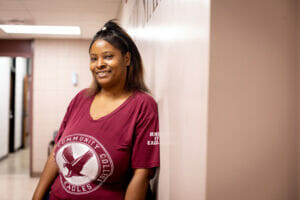 “My grandmother, who died last October, was always a major part in anything I did. I had a tape recorder as a child and she encouraged me to just talk into that microphone to express my feelings. From there, I began to love writing. I love how words can come together and just move people.”

She has herself been a victim of domestic violence and lived briefly in a shelter.

“Then, I was injured on the job while working security and couldn’t get a job after that.

“I had one of those times where you know deep down you have potential, but you’re not doing what you’re supposed to be doing. There’s something out there that’s greater. It was at that point I asked myself, ‘What is really stopping me from finishing college?’,” she said.

Her achievements since then have been steady. She’s balanced school with a job as a night auditor in a hotel. In Spring 2020, she won the honorary William Winter Scholars Award. She’s become a mainstay at the Writing Center at the college’s Jackson Campus-Academic/Technical Center, even becoming a tutor to fellow students.

“Jessica is always reflecting on tutoring sessions with an eye toward inclusion and accessibility, planning ways to enhance our services for bilingual and international students and those with learning differences,” said Alisa Elliott, director of the Writing Center at JATC.

Located at the college’s Jackson, Raymond and Vicksburg campuses, the center functions as a place where students receive free one-on-one writing consultations with trained peer tutors on topics such as organization and structure, effective paragraph writing and essay development, audience awareness and purpose and proper documentation of source texts and grammar.

“The JATC Writing Center is not only a space for one-on-one writing and tutoring, but for connecting with other students and being a resource for supplemental materials, like the outlines and handouts Jessica has helped to create,” Elliott said.

After Hinds, Bradford plans to pursue a degree in social work from Jackson State University.

“My main goal after school is to open a nonprofit recreation center for our youth,” she said.