Students in Diesel Equipment Technology this semester at Hinds have been jacks of many trades. If they do well, all 12 will be a step closer to being a master…
By: Danny Barrett Jr.

Students in Diesel Equipment Technology this semester at Hinds have been jacks of many trades.

If they do well, all 12 will be a step closer to being a master at one of them, namely the in-demand field of being a big-rig mechanic.

“You have to understand the concept of diesel and how it works,” said Jakeb Cooksey, 22, of Lake, in Scott County. “Systems are different than your light-duty vehicles. On those, there’s so many now because they’re introducing new things on environmental standards.” 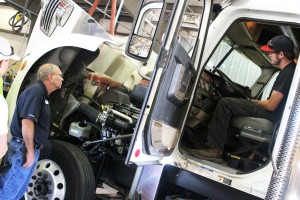 Jesse Locke, 22, of Brandon, has done a little of everything in the realm of large equipment, from retail to welding to irrigation work. But, now he’s ready to tackle his passion – under the hood of a semi.

“I’ve always had a knack for fixing things, taking things apart and seeing how they work,” Locke said. “And how to make them faster, stronger and more powerful.”

Preparing for the next generation of diesel engines has sped up demand for new blood in the diesel mechanic world – something not lost on Jimmy Flint, of Empire Trucking Sales LLC, during a daylong seminar the company put on earlier this semester at the Gray-Partridge Center near the Raymond Campus.

“The GHG-17, the next generation of engines, is geared to fuel economy,” Flint said. “We can’t get rid of CO2 gas unless you decrease the amount of fossil fuel you burn. The better fuel economy you get, the less CO2 gas is there.”

Empire is among several firms which partner with the diesel mechanic program. Two full-time trainers with Empire, Flint and Bradly Cade, worked with students to focus on preventive maintenance on big rig engines. That’s the second of two, eight-week courses in the program, which comes after a fundamentals course. Two parts each of Diesel Engine and Electrical Systems courses follow before it wraps up with Air Conditioning and Heating and Hydraulics. Students who complete the program have the option to learn more about trucking or about heavy equipment, such as equipment used in logging and farming. 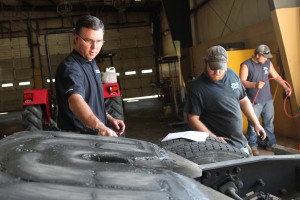 Bradly Cade, a trainer with Empire Truck Sales LLC, works with student Trent Craft during a hands-on workshop earlier this semester at the Gray-Partridge Center near the Raymond Campus. (April Garon/Hinds Community College)

“The seminar gives us a chance to get some hands-on experience on late-model trucks with the latest technology in our field,” Diesel Equipment Technology Instructor Brent Johnson said, adding students are graded on following directions, work habits, attendance, cleanliness in addition to written examinations. “What we did is learn how to maintain equipment, make it safer, more fuel-efficient, and more dependable for customers.”

Starting in 2010, diesel engines for the U.S. market were required to emit lower nitrous oxide levels to comply with standards set forth by the Environmental Protection Agency. Most manufacturers have reengineered their products to meet the standard, with more upgrades expected in the coming years. Engines powering big rigs on the road a decade ago averaged 6 or 7 miles per gallon of fuel, whereas economy has improved to about 10 per gallon on the newer models, Flint said.

Emissions standards being a new normal coincides with the ranks of big-rig mechanics in the region getting a little grayer. To that end, a new initiative between Hinds and Empire could infuse the industry with talent trained specifically to deal with ins and outs of diesel engine technology.

“There’s a severe technician shortage in Jackson,” Johnson said. “These partners are working with us to ramp up our program. It will have a total of eight instructors, with four instructors to be housed at the Empire base in Richland, while another four will be here at the Raymond Campus. They will teach the third semester course of study there. We were graduating 20 a year and the goal is to graduate 60 a year, with industry assistance.

“But because of all that technology, these guys’ pay will have really jumped. Truck mechanics today who have worked on commission are making six figures now.”

Cade points out the advanced training on newer-model engines should give a leg up to all students in the program willing to put in the effort.

“They’ve added a lot of parts to the exhaust systems and there’s computers all over the truck now,” Cade said “So, it’s more involved to troubleshoot.

“But, we like to hire technicians who come from a heavy-duty mechanical program like this. That way, we know they’ve had some experience and know the basics.”

Locke, for one, is eager to earn what he’s worth once he completes his coursework.

“It’s an industry where a lot of older people about to retire can’t turn wrenches anymore, and it’s opened a lot of positions for young guys like myself and these others,” he said. “And it’s a chance to earn a living for me and my future family.”