The family of deceased Hinds Community College trustee Talmadge Portis Jr. has established a new scholarship in his name to be given to an athlete. Portis, who died in February…
By: Cathy Hayden

The family of deceased Hinds Community College trustee Talmadge Portis Jr. has established a new scholarship in his name to be given to an athlete. Portis, who died in February 2018, was a member of the Board of Trustees from 1982 to 2013.

Portis was a manager at Packard Electric for many years and also a member of the state Board of Education. He was widely known throughout Mississippi and the nation as a passionate advocate for education but especially career-technical education. 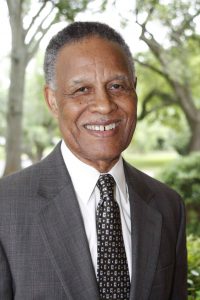 During his years at Packard Electric, he encouraged employees to finish their high school equivalency certificates. He took many of his employees and students under his wing and pushed them to achieve. In the 1990s, he served on then-Gov. Ray Mabus’ Commission of Workforce Education.

“Daddy was a people person,” said Lisa Portis Morgan, one of his three daughters. “He dedicated his career to helping people be better students, employees, family members and citizens. He impacted the lives of every person that he came in contact with, because he took an interest in how they could be the best persons they could be.”

Morgan said her dad’s long-standing friendship with Hinds President Dr. Clyde Muse makes “Hinds the perfect place for a scholarship in my Dad’s honor because of his work and dedication to the board and because he and Dr. Muse were great friends and respected each other as colleagues.”

“Talmadge was really a trailblazer because he came along in a very important position at a time in Mississippi’s history when people weren’t accustomed to an African American in the roles he was playing,” Muse said. “He was the best I’ve ever seen at crossing all those lines. He didn’t see black, white, red or green. He would address the issues and the problem. It was great to have a person with his experience in workforce and training.”

“Hinds has been a partner right along,” he said. “It was instrumental in getting Packard Electric located in Mississippi, provided a place for training before we had our buildings and provided instructors in areas critical to needed skills. Hinds has always been willing to develop the workforce.”

Muse said Hinds set up a training program with Packard Electric in Clinton similar to the relationship Hinds has with Continental Tire and other local businesses.

Portis was a native of Laurel. He earned a Bachelor of Science degree from Alcorn State University and served his country in the 82nd Airborne Division. He started his career as an elementary school teacher. He was the first African American to work for the Mississippi Employment Security Commission. He was then recruited by General Motors to head the personnel division of Packard Electric in Clinton. After he retired, he formed his own parts distribution company.

Portis was active in sports, lettering in football, baseball and tennis at Alcorn. He played with the Laurel Black Cats, a semi-professional baseball team located in Laurel, one of Mississippi’s original independent Negro League charter franchises. He led a group in Laurel that spent a summer creating a baseball field and tennis courts.

“I am so pleased that the family has decided to honor him with a scholarship at Hinds,” Muse said. “I hope it will get to endowed status so it will be here forever.”

Endowed scholarships may be established with a minimum gift of $15,000 donated to the Hinds Community College Foundation. The gift will constitute the initial principal for the endowment.

The principal will be maintained and only the income earned will be awarded in the form of scholarships. Non-endowed scholarships may be established with a minimum gift of $500.

All gifts of cash and/or stocks are fully tax deductible.

Editor’s Note: This story was originally published in the fall 2018 issue of Hindsight alumni magazine.