Dr. Bobby Cooper didn’t plan to stay at Hinds Community College’s Utica Campus for 45 years. Goodness knows, he had plenty of opportunity to go to his alma mater Tougaloo…
By: Cathy Hayden 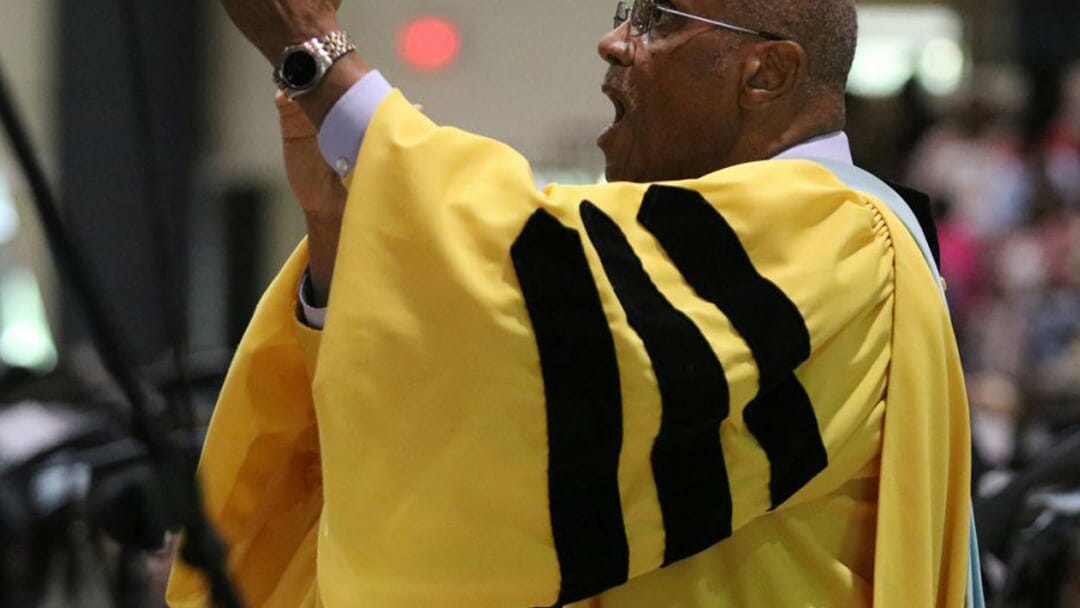 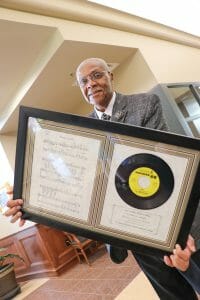 As the longest serving employee this year, with 45 years of service, Dr. Bobby Cooper was presented with a special momento – a framed 45 record of the song ‘Amen, Amen” and a paper copy of the musical score. The song is one performed many times by Cooper’s Jubilee Singers over the years. Cooper retired at the end of June 2018.

He was lured to what was then Utica Junior College in 1972 as a music instructor by the college’s participation, along with Jackson State and Tougaloo, in Opera/South, a now-defunct black opera company based in Jackson.

“Utica was looking for someone to work with their opera chorus for Opera/South,” he recalled. “I didn’t come to stay – not to be there forever. Things changed when I got there. I really liked what I was doing.

“I was mainly just a one-person music department. I taught piano, I taught voice, I taught theory. You name it, I did it. I enjoyed it very, very much,” he said.

Then he had a life-changing experience. He read “Black Man’s Burden” by Utica Institute founder Dr. William Holtzclaw, learning about the all-male Jubilee Singers group formerly used as a fund-raising tool to keep the historically black college afloat. The group was active from 1922 to 1941.

“I said, ‘Wow, this is something I would like to do.’ When I was at Tougaloo College, I was in a male group. I wanted to continue it so I said, ‘I’m going to start this back.’ It took off.”

Cooper retired at the end of June as the current longest serving Hinds employee. Along the way, he was recognized many times for his work. His awards include Outstanding and Distinguished Academic Instructor of the Year, Hinds Humanities Teacher of the Year, Life Star, Hinds Hero, HEADWAE recognition and the college’s most prestigious recognition, the 3E Award. The Fine Arts Center on the Utica Campus bears his name.

He plans to stay productive in his retirement. He has applied for a National Endowment for the Humanities grant to write the story of the Jubilee Singers and embark on a book tour. As the motto goes, “Once a Jubilee, always a Jubilee.” 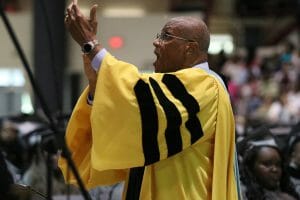 Dr. Bobby Cooper directs the Jubilee Singers at the May 2018 graduation ceremony on the Utica Campus.

Cooper leaves behind a legacy of excellence in his music program but will always be best known for the Jubilee Singers and their rebirth.

Dr. Clyde Muse, who became Hinds president July 1, 1978, before the merger of the two institutions, recognized the jewel the college had in Cooper and the Jubilee Singers.

“I’ve been pleased to support them over the years. They truly are great ambassadors for us,” he said.

Muse recalls attending a national community college convention in New Orleans a few years ago when the Jubilee Singers performed. “I’ve been going to those meetings for years. Very seldom does anybody get a standing ovation, but theirs was automatic when they performed,” he said.

Retired Utica Campus Vice President Dr. George Barnes, who worked at the campus from 1962 to 2013, counts Cooper as a friend.

“He was tough. He was kind and friendly but he wasn’t always soft,” Barnes said. “If something needed tightening down, he knew when he needed to do it. He was firm and fair. Students had a lot of faith in him. They loved him.”

Cooper’s Jubilee Singers started small – four young men, three of them from Illinois where he had gone to graduate school. Now the groups average about 12 to 15 singers. “These were my better singers. Just because you were a part of the choir did not mean you would be one of my Jubilee Singers,” he said.

The Jubilee Singers traveled extensively and performed widely. One of Cooper’s favorite performances was at the Vatican in Rome in 1999 where they sang “Ave Maria” and the group’s trademark “Amen” for Pope John Paul II.

“It was so exciting to sing at the Vatican. People came and talked to us and talked to the fellows. We were really celebrities. We enjoyed it so much,” he said.

Things haven’t always been smooth. There have been a few trials along the way. And he and his wife have been awakened more than once by a student calling at midnight after getting into a difficult situation.

“Kids who were not quite sure about themselves and what they can do –you get a chance to work with them because enrollment was small. You your own kids,” he said. “I always had a house full of my students.

But I enjoyed it and still hear from those kids today about their experiences. It was an environment that you could help the kids, and they wanted to do better. I’ve got former students everywhere.”

One of those is James Adams (1996, 2001), senior program manager for a Dallas nonprofit called Big Thought. “I experienced some rough years while in college at Hinds, and Doc was always there to say it would be all right. He supported me however he could and taught me, as a choir member and Jubilee Singer, to be a gentlemen of honesty and excellence. I saw the best example in the life he walked before us all,” Adams said.

Tracy James, one of the first Utica Campus music graduates, has known Cooper since 1977. She’s a vocal music teacher at a middle school in Ohio. “Music became my livelihood, so I owe much to Dr. Cooper for his wisdom and inspiration he instilled in me,” she said. “One thing Dr. Cooper taught me was always bring your ‘A’ game to the classroom.”

Calvin Bogan Sr., a music major from fall 2009 to summer 2013, is youth pastor at West Point Baptist Church in Hattiesburg.

“Dr. Cooper is a voice of assurance, the portrait of grace and the epitome of kindness. One of his many wonderful attributes I’ve noticed is his timeliness. My most memorable moment with Dr. Cooper is testament to his impeccable timeliness,” he said.

Students had planned a birthday celebration for Cooper on Nov. 3, 2010, but Bogan wasn’t able to be there after his mother died of cancer and her funeral was on that day.

“I viewed my mother for the last time. As I stood there, I felt a firm, but gentle hand on my shoulder. That hand was that of Dr. Cooper. He spent his birthday with my family and I as we funeralized my mother,” Bogan said. “I can say for me and everyone else that Dr. Cooper has always been there for anyone who needed him and is always in time.”

One is for a museum exhibit focused on his legacy that is being called the Utica Jubilee Experience.The plan is to display some of Dr. Cooper’s archival materials, along with historical information about the Jubilees – both the original group from the 1920s and 1930s, and Dr. Cooper’s Jubilees. The museum is to feature interactive exhibits allowing visitors the chance to experience one of Dr. Cooper’s Jubilee concerts, as well as educational materials for teachers bringing their classes to the exhibit.

The other option is a gift to the Dr. Bobby G. Cooper Scholarship Fund, which provides scholarships to deserving music education students at the Utica Campus. The recipients are selected each year based on their talent, financial need and potential to impact the world.

Editor’s Note: This story was originally published in the summer 2018 issue of Hindsight alumni magazine.