RAYMOND – Brian Tiblier had worked for years in what he called “survival jobs” prior to re-entering school to earn a High School Equivalency certificate.

“I hung drywall and did a lot of commercial painting,” said Tiblier, 48, of Terry, who finished a job of a different kind June 22 by earning his HSE, formerly known as a GED, and valuable job training skills along the way. 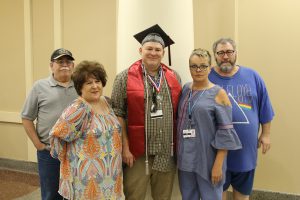 Being part of an ongoing program to blend necessary academic courses and career training means Tiblier has the credentials he needs to qualify for the kind of work he pursues.

“I surely needed it for the job I want, in manufacturing by way of the Industrial Maintenance program here at Hinds,” he said.

Tiblier was among 110 people of varying ages and stations in life recognized during a ceremony Friday, June 22 at Cain-Cochran hall on the Raymond Campus. All earned their HSE this academic term. A portion of them had already gone a step further and earned either a technical or career certificate from the college during spring graduation ceremonies in May.

Nearly half, including Tiblier, participated in the MI BEST program at Hinds who received a GED during the ceremony. MI BEST is Mississippi’s version of the nationally recognized Integrating Basic Education and Skills Training program, or I-BEST. It allows adult students to train for a job skill while earning their GED high school equivalency certificate at the same time. Students are prepared to be job-ready in six months to a year, train in high-demand areas and earn national certifications. 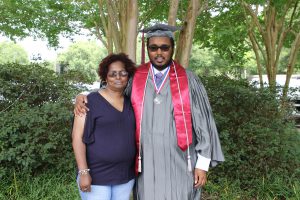 Kristina Tillett, 16, and Alfred Brown, 22, both of Vicksburg, earned their HSE certificates after difficulties in high school in recent years.

“High school just wasn’t for me,” said Tillett, who earned honor student status in the program and is eligible for a half-tuition scholarship to earn college credit going forward.

Brown left high school before his senior year. His results in the classroom in just a few years speaks volumes, as he’s now earned a high school equivalency, a career certificate in Culinary Arts Technology and his ServSafe food and beverage safety certificate.

“I had to help out my mom and sister,” Brown said. “But, being in the program kept me from just staying at home. This is all about the pride and happiness I get from being in the kitchen.”

Mary Powers, workforce director for Central Mississippi Planning and Development District, spoke to this year’s recipients on the value of their accomplishment down the road in life. She used the analogy of riding a dead horse to mark how important an accomplishment the ceremony represented. 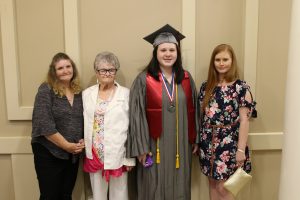 “I want you to think about yourselves and your circumstances before you came to Hinds,” Powers asked of the newly-minted high school graduates. “None of you had a high school diploma. What matters is somewhere along the way, you realized your horse was dead. Maybe you tried to get a job, and they turned you down. Maybe you got a job, but it didn’t pay very much.

“You and Hinds Community College have buried those dead horses. You can decide to take on anything you decide to take on. Some of you have gone further and maybe gotten a career certificate. You have my utmost respect, as it took a lot of courage and effort on your part.” 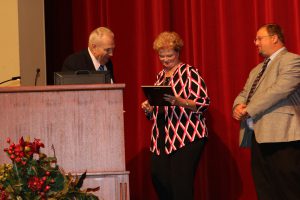 Hinds Community College President Dr. Clyde Muse presents a plaque to Mary Powers, workforce director for Central Mississippi Planning and Development District, during a ceremony June 22 at Cain-Cochran Hall on the Raymond Campus recognizing those who had earned a High School Equivalency through the college. At right is Dr. Chad Stocks, vice president of Career and Technical Education and Workforce Development. (Hinds Community College/Tracy Duncan)