PEARL – A few years ago, Jessica Hardwick decided that since her family had grown by one, it was time to similarly grow her opportunity to help support them. Enter…
By: Danny Barrett Jr. 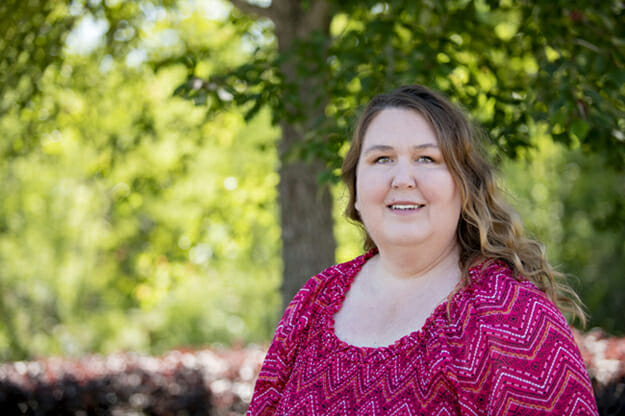 PEARL – A few years ago, Jessica Hardwick decided that since her family had grown by one, it was time to similarly grow her opportunity to help support them.

Enter Hinds Community College, and the third-semester nursing student at the college’s Rankin Campus has a bright future thanks to help from the Carla McCulloch scholarship. The aid is named for a Hinds nursing student who died in 1991 in a three-wheeler accident in Simpson County. It is funded by her parents, Larry and Carol McCulloch, formerly of Magee and now living in Roanoke, Va. 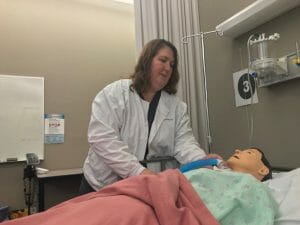 “I’ve been out of college for a good, long while,” said Hardwick, 47, an Oxford native and current Braxton resident. “When I was at the University of Alabama years ago, everything you had to do was done in person, and in long lines. It’s been a very different experience, but everyone I’ve dealt with have been helpful.”

She had gone to school for education originally, but decided to stay at home to work as a proofreader for a court reporter. She’s done that for several years after the birth of her daughter, Libby, 8, before turning to school in 2020.

Her inspiration to enter the medical field comes from her late mother.

“My mother had also started back to nursing school when I was in the first grade,” she said. “She graduated in May of that year but was killed in a car wreck that August. Later in life, I worked at UMMC for a little while as an administrative assistant, and that kind of spurred me back toward a healthcare career.”

She is on track to graduate from Hinds in spring 2022 with her Associate Degree Nursing credential and has already been accepted to the RN to MSN program at UMMC, where she will pursue being a nurse practitioner.

Her clinical instructor Chris Pittman nominated her for the scholarship, which is assisting her education along with the Sue Graham Sartain Nursing scholarship.

“Jessica has exhibited professionalism and leadership skills among her peers,” Pittman said. “She is a caring and compassionate student who strives to complete her requirements above and beyond what is expected. She offers help to her peers and is always willing to encourage others.”

For her part, Hardwick, whose husband, Doug, works as a warehouse manager, is appreciative of the chance for the help paying for school.

“It was an honor to have been given the scholarship for this year,” she said. “I know it’s special to her parents. I know the scholarship has a lot of meaning to them because it keeps her memory alive.

“Without the help, I would have gone through financial aid and used my grant money, and then take out more loans for the rest.”

On campus, she is a member of the Student Nurse Organization and is part of the Alpha Omicron Omega chapter of Phi Theta Kappa honor society.

She’s ready to encourage anyone in her age range to return to school and improve their earnings potential.

“I say to them just try it. If it’s something you have a passion for it, don’t be afraid to get back out there and try. It’s never too late to head down a new path.”

Carla McCulloch was a Simpson Academy graduate and a Hinds nursing student at the time of her death. The award is made annually to a nursing student in their second semester or later who demonstrates the caring and enthusiasm for nursing that Carla embodied.