“At a big university, you’re more of a number than an actual student. At Hinds, you’re a student with a name.”
By: Danny Barrett Jr.
Photography by Brad Smith 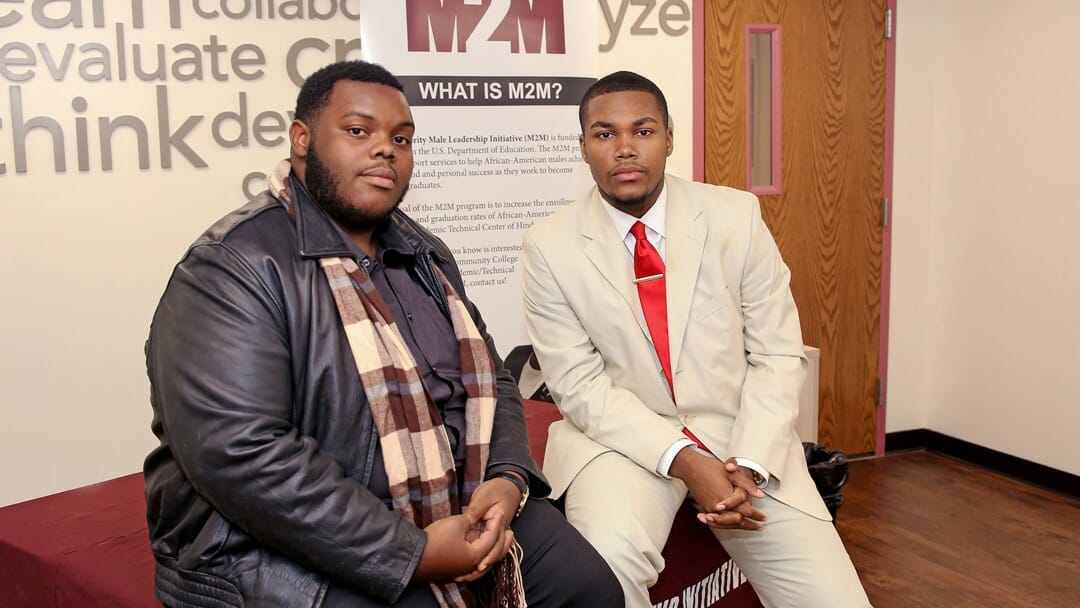 The Minority Male Leadership (M2M) program at Hinds Community College Jackson Campus-Academic/Technical Center helps students organize their lives now so that they might lead others later.

“I did horribly my first two semesters out of Murrah High School,” said John Hendricks, 22, who entered the program this year. “I wasn’t the most studious and mature. I wouldn’t have made it through a four-year college back then. I was too rough around the edges. Then, I took some time off but came back to school focused.”

Hendricks is on track to graduate in spring 2022, then major in education at a four-year university. He wants to teach his future students how to think and make decisions for themselves.

“There’s a beauty to learning how small you are in the grand scheme of things,” he said. “It makes you hone in and focus on what you’re doing and control your own destiny. I want to bolster creativity and imagination in my students because it’s important to look at events in history and figure out how we can get people to want to do the right thing.”

Funded by a grant from the U.S. Department of Education, the M2M program provides leadership training, career counseling, tutoring, mentoring and opportunities for travel to senior level universities for program participants.

Empowering students to take responsibility of their goals, both academic and personal, is a primary goal of the program. Hendricks’ journey is an ongoing success story toward that end, M2M director Dr. Aleisha Escobedo said.

“John, like many of our students, has had to overcome some adversity just to get to the finish line,” Escobedo said. “I am so proud of John because even when things got difficult for him, he never gave up.”

Michael Mitchell, who was M2M president this semester, started out at a four-year university after graduating from Jim Hill High School but found helping hands at Hinds with more than just academics. For starters, he had difficulties enrolling in school due to issues with his Social Security number.

“The person in Financial Aid did follow-up work with me and saw me as a student, rather than a number in the system,” Mitchell said. “At a big university, you’re more of a number than an actual student. At Hinds, you’re a student with a name.”

Mitchell counts his communication skills as big pluses toward an eventual career in digital marketing. His time management, he said, has come a long way since becoming part of M2M.

“The thing with M2M is that it’s like the on-campus fraternity here at the Jackson Campus,” he said. “What other program can you join where mentors teach you about how to better yourself and manage your workload? M2M has saved a lot of people.”

As president, he’s been someone the membership looks up to, Escobedo said.

“Michael is the type of student that others look up to,” she said. “He is a visionary and will take an idea and develop it into something wonderful. Michael is wise beyond his years and his mentorship is what our youth needs.”

Services offered in the M2M program are made possible by the Predominately Black Institutions (PBI) program established by the Higher Education Opportunity Act of 2008 and authorized under Title III, Part A of the Higher Education Act of 1965, as amended (HEA). The PBI program makes grant awards for up to five years to eligible institutions to plan, develop, undertake, and implement programs to enhance the institution’s capacity to expand higher education opportunities for low-income and Black American students.

The M2M program continues as a part of the college’s new Predominantly Black Institutions (PBI) grant. For the next five years, the M2M program will have a special emphasis on economic empowerment, Black culture and leadership training. The academic supports previously offered through the program will now be the responsibility of the Student Success Center.