UTICA – The man who’s known as the “Hardest Working Man in Radio” and “The Fly Jock” asked this year’s graduates of Hinds Community College Utica Campus to take a page from his own book and never rest on their laurels. 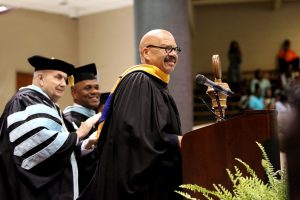 The Utica Campus, which is designated an HBCU (historically black college and universities), was selected by the Tom Joyner Foundation as its June 2018 School of the Month. The program is the signature such effort of his foundation in its support of HBCUs through fundraising efforts, scholarships, endowments and capacity-building enhancements.

The Utica Campus is one of two, two-year HBCUs selected for the honor, which is traditionally reserved for four-year institutions. Annually, the Tom Joyner Foundation selects 11 HBCUs with which to partner. During the partnership, funds are raised in support of student scholarships and other initiatives to help sustain the HBCU.

Joyner asked students to stay focused on the next step in their education and added a twist uncommon to most graduation ceremonies but common indeed for times when he delivers a keynote address at one – he gave $5 to each graduate with a tacit pledge from each that they’d make it grow as they continued their education.

“I’ll put it in your hand, and you’ll make it grow – with your good ideas,” he said. “I want to see you add to that $5, with some more zeroes and some commas. When I see you again, I want you to tell me you made your idea work, and how you helped someone else.” 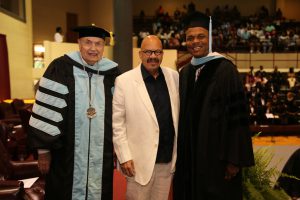 On Saturday, Joyner visited the Mississippi Job Corps Center in Crystal Springs and attended a special program on campus recognizing his foundation’s work to support HBCUs.

“I heard so many stories there of overcoming adversity,” Joyner said of the visit, adding he was impressed by his tour of the campus. Joyner shares a hometown – Tuskegee, Ala. – with that of William H. Holtzclaw, who founded the Utica Normal and Industrial Institute in 1903, which is the Utica Campus today.

“What I love most about Hinds Community College in Utica, is that it offers something for everyone,” he said. “There’s traditional students who come straight from high school who intend on changing their direction. Whatever the situation, whatever your goals, God brought you to Hinds at the right time. Take it from me, HBCUs are the right place to be.”

Joyner also urged students to participate in civic life to make sure their voices are heard.

“We can tweet about social injustice, we can even march about it, but nothing will happen until we vote out elected officials we don’t believe in. It won’t happen at all unless you go vote.”

Traditional students with honors credentials walked in the grand processional into the gym side-by-side with those who took a more circuitous route to starting college.

One, Antonio Green, beamed with happiness outside the gym with his mother, Leah.

“I wanted to play football coming out of high school in New Orleans, but I’ve gone into Electronics Technology to start a career there,” Green said. 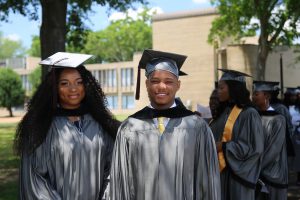 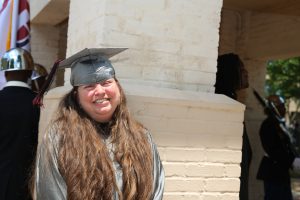 Jennifer Burnett, a custodian at Hinds Community College Utica Campus, earned an Associate of Applied Science degree in Computer Programming Technology during the graduation ceremony on campus May 13, 2018. Burnett earned a Career Certificate in the subject last summer. 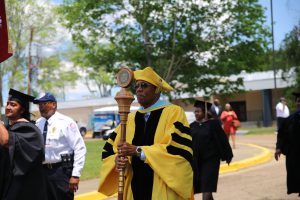 Dr. Bobby G. Cooper, director of the Jubiliee Singers at Hinds Community College Utica Campus, carries the mace en route to the graduation ceremony held on campus May 13, 2018. Cooper, who is retiring this year, is Hinds’ longest-tenured employee, with 45 years of service. 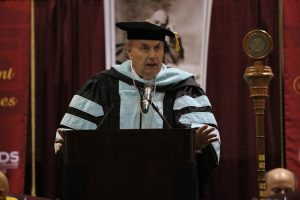 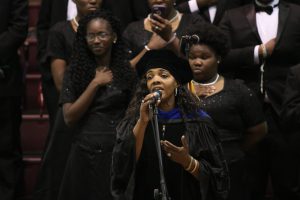 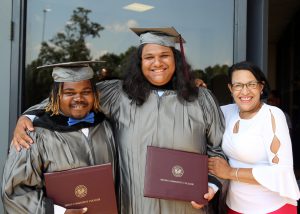 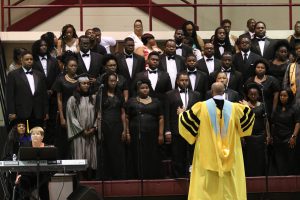 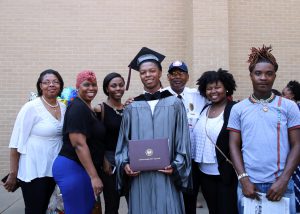 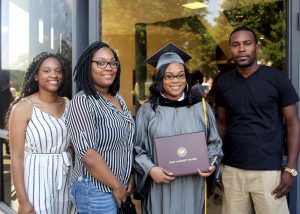 Amber Sanders, second from right, of Jackson, earned an Associate of Arts degree from Hinds Community College Utica Campus during the ceremony held on campus May 13, 2018. With her are sisters Charlotte Sanders and Samantha Johnson, and brother Romeo Johnson. (Hinds Community College/April Garon) 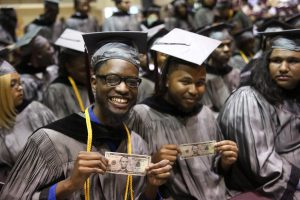 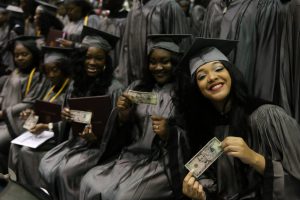 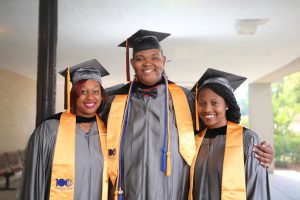 From left, Alexis Williamson, Jeffery Fairley, both of Jackson, and Brianna Watkins, of Summit, each of whom graduated from Hinds Community College with honors at ceremonies held at the Utica Campus May 13, 2018.