Family members of Louis Lee along with Hinds Community College Board of Trustees President Robert Pickett, far left, unveil the sign for the Louis Edward Leon Lee Classroom Building on…
By: Cathy Hayden 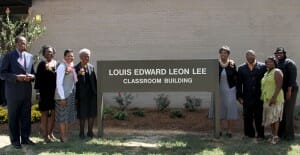 Family members of Louis Lee along with Hinds Community College Board of Trustees President Robert Pickett, far left, unveil the sign for the Louis Edward Leon Lee Classroom Building on the Utica Campus. 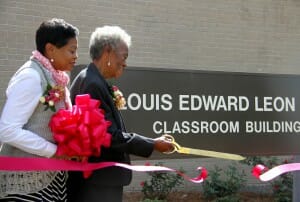 Dorothy Shannon Lee, widow of Louis Lee, cuts the ribbon for the new Louis Edward Leon Lee Classroom Building on the Utica Campus with the help of her daughter, Dr. Clara Lee. 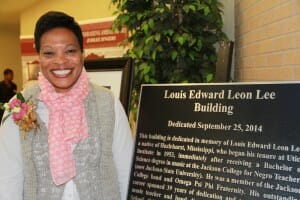 Dr. Clara Lee stands beside the plaque that will go in the building named for her father, Louis Edward Leon Lee, at Hinds Community College’s Utica Campus. 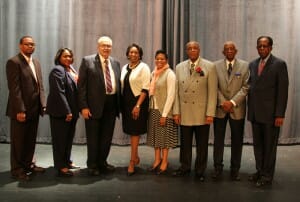 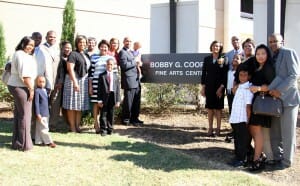 Family members of Dr. Bobby Cooper gather for the ribbon-cutting for the building on the Utica Campus.

The Fine Arts Building on the Utica Campus was renamed the Bobby G. Cooper Fine Arts Center, after the chairman of the Humanities Division and coordinator of music and art. He is best known as the director of the renowned Jubilee Singers, the historical African-American spiritual vocal group that traces its roots to the 1920s. As part of the ceremony, a number of former Jubilee Singers joined current members to perform on stage at the Cooper Center.

“My love affair with this campus started in August 1972,” Cooper said. “Little did I know that that love affair would someday be turned into a building that would bear the name Bobby G. Cooper Fine Arts Center. What a thrill! I am indeed humbled by this honor.”

The building that housed the band for Hinds Agricultural High School on the Utica Campus is now the Louis Edward Leon Lee Classroom Building after the former music instructor and band director who retired in 1992 and died in 2007. Lee received a Bachelor of Science degree in music at the Jackson College for Negro Teachers (now Jackson State University). He was a member of the Jackson College band and Omega Psi Phi Fraternity.

Dr. Clara Lee, representing the Lee family, said the Utica Campus as well as the community was special to her father. “Louis Lee loved this campus. For 39 years he drove 70 miles (from Jackson) to come here to be with the students and be a part of the faculty,” she said. “It is such an amazing blessing to know that Louis Edward Leon Lee’s name will forever be a part of this campus. And it’s so special because I can certainly tell all of you that you will always certainly be a part of him.”

Hinds President Dr. Clyde Muse knew both men.  Lee “was a great teacher, he was well liked and certainly deserving of his name being on the building, a building in which he taught for so many years,” he said.

Muse credited Cooper with resurrecting the Jubilee Singers, which had long time been identified with the campus.  “He is one of the best ambassadors this college has and we appreciate him,” Muse said.

Current Utica Campus Vice President Dr. Debra Mays-Jackson was a student of both men. Cooper convinced her to change her major from accounting to music. Lee was responsible for teaching her to play the saxophone.

“I am only one of countless students who have personal and precious stories we will cherish for a lifetime,” she said. “As with music, both Mr. Lee and Dr. Cooper have shown no boundaries, no biases, no prejudices. They have exposed and nurtured thousands of students.

“Their humble spirits resonate from each conversation and performance. Their contributions have enhanced the music department and enriched the culture of the Utica Campus as a whole surpassing our surface knowledge of their work,” Mays-Jackson said.

Bolton Mayor Lawrence Butler was a driving force behind the naming of the Cooper Center.

“When I think of Dr. Cooper, I think of a man of faith and education, a man who has really committed himself to the Utica Campus of Hinds Community College,” he said. “From now on when we talk about Utica … this is what I’m going to say. ‘You go to Utica. Look to your left. It’s Dr. Cooper’s building.’ ”

Robert Pickett, president of the Hinds Board of Trustees, was a contemporary of Lee at a Brookhaven high school. “He mentored me; he taught me how to play,” Pickett said. “He was a good person. I don’t think he ever changed. He was a kind person, always liked to make jokes and converse with you.”

“When the college and the Board of Trustees make the decision to name a building in honor or memory of the individual, it is a decision made with deliberate thought,” Pickett said. “I think this event is significant because we’re honoring two people who have dedicated their entire lives at this institution.”