RAYMOND – With scholarship money on the line, Kristen Stull didn’t crack under pressure. In fact, she cracked up those in charge of a scholarship program sponsored by GEICO by…
By: Danny Barrett Jr.

RAYMOND – With scholarship money on the line, Kristen Stull didn’t crack under pressure.

In fact, she cracked up those in charge of a scholarship program sponsored by GEICO by creating the funniest meme caption submitted for the program. 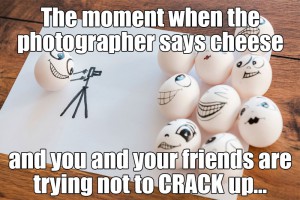 Stull, of Florence, a freshman on the Raymond Campus studying business, has been selected as a 2016 MEME 4 Money: GEICO Creativity Scholar by the national Phi Theta Kappa Honor Society. The insurance provider awarded five such scholarship based on the comedic value of captions submitted by PTK members nationwide for a meme photo on the scholarship application.

Stull’s was chosen among those five best out of nearly 1,000 entries. Her $1,000 scholarship award covers expenses for the spring 2017 semester. Captions submitted had to be 100 words or shorter, Stull said.

“We had a few pictures to choose from,” she said. “There was the eggs, which is the one I chose. There were some other pictures, like a dog at a beach.

“Coming up with a meme was more challenging than I thought it would be. It took me a while to come up with the egg joke. I happened to be talking to a friend, and they said something about ‘cracking up’. I thought, ‘Hey, I could use that!’”

In addition to PTK, Stull’s activities on campus also include being a member of the Hinds Hi-Steppers precision dance team. She says her interest in studying business is an outgrowth of being part of the business academy at Florence High School.

“We actually had a coffee shop that we had to run, as students,” she said. “I was the marketing manager for a couple of years. I loved the business aspect of it.”

Phi Theta Kappa is the international honor society for community and junior college students. Membership in Phi Theta Kappa is extended to students who have a 3.5 cumulative grade point average or above on 12 or more transferrable credit hours. There are more than 1,200 Phi Theta Kappa chapters throughout the United States and abroad. Its national headquarters is located in Jackson.