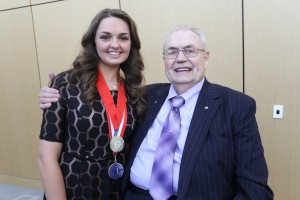 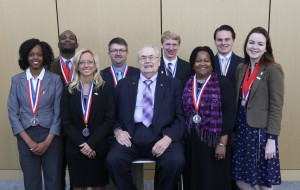 Honored among the 64 named to the list at a ceremony March 22 at the Jackson Convention Complex were:

[tweetable alt=””]The All-Mississippi Academic Team[/tweetable], begun in 1994 as the first state-level academic recognition program for community and junior college students, recognizes the scholarly achievements and leadership accomplishments of students enrolled in community and junior colleges across the state. Team members were selected following several rounds of judging from education officials, business leaders from across the United States and a distinguished panel of representatives from federal agencies and national education associations based in Washington D.C.

Fifteen students were named to the First Team, with each receiving $1,000 scholarships. First and Second Team members receive special medallions, certificates and printed resolutions from each chamber of the Mississippi Legislature. They are also eligible for scholarships at many four-year universities designed exclusively for All-Mississippi Academic Team members.

The All-State Academic Team recognition program is an outgrowth of the All-USA Community College Academic Team, administered by Phi Theta Kappa. Twenty students named to the team will be featured April 12 in USA TODAY and receive $100,000 in scholarships.

All News
CATEGORIES: News
← Meeting on Gateway to College Program at Hinds CC set for March 29 Hinds CC band to share stage with Marsalis, others at ASU Jazz Festival April 16 →