Mathematics Instructor Jeff Hughes, of Pearl, and Robert Harrison Hunter, of Hermanville, a sophomore computer engineering student on the Raymond Campus, have been named Hinds CC’s honorees for the Legislature’s…
By: Danny Barrett Jr. 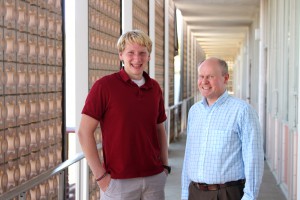 Robert Harrison Hunter, left, and Jeff Hughes, right, have been selected as HEADWAE (Higher Education Appreciation Day-Working for Academic Excellence) student and instructor for 2015-2016. HEADWAE was established in 1988 to honor academically talented students and faculty who have made outstanding contributions in promoting academic excellence. The 29th annual program is scheduled for Tuesday, Feb. 2, 2016.

Hughes, a 27-year math teacher at Hinds, was educated at Mississippi College and the University of Mississippi, where he earned bachelor’s and master’s degrees in mathematics. He is the curriculum coordinator of mathematics across Hinds’ six campuses.

“I’m honored to be named to represent Hinds at the HEADWAE program,” Hughes said. “It’s really all about the students for me, and I enjoy what I do.”

Hunter, who was home-schooled in his hometown, near Port Gibson, until he enrolled at Hinds, is a member of Phi Theta Kappa and serves as the honor society’s vice president of scholarship. He is also a member of Honors Institute and, in 2014, studied in England as part of Hinds’ international studies partnership with Bridgewater College.

Seeing the world has enhanced his Hinds experience in ways unimagined when he entered college.

“Studying abroad was a great experience,” Hunter said. “It really helps expand your boundaries and your mind to give a greater perspective on the world. Hinds has been a good bridge from being home-schooled to a four-year university. Professors like Mr. Hughes has been great in preparing me for courses I’ll have to take next year.”

Hunter is also the recipient of the ACT Scholarship, which has supplemented the financing of his education alongside the Mississippi Tuition Assistance Grant and the Mississippi Eminent Scholars Grant.

After finishing his classes in Raymond in 2016, Hunter plans to move on to Mississippi State University to continue his studies in computer engineering.

Hughes has co-authored two textbooks, College Algebra and Precalculus, and has presented innovative concepts in teaching and inspiring students at various professional conferences across the nation. He has been the recipient of the college’s Outstanding Academic Instructor of the Year Award and also chosen as Phi Theta Kappa’s Teacher of the Year. His service to college boards includes the Faculty Council, co-president of the Hinds CC Education Association and, at present, treasurer and historian of that organization. At the state level, he is a past president of the Mississippi-Louisiana affiliate of the American Mathematical Association of Two-Year Colleges.

Also a member of the Mississippi Faculty Association of Community and Junior Colleges, Hughes is a sponsor of Student VOICES, a student advocacy group at Hinds. Outside of class, Hughes is a part-time minister of students at his church and has traveled with students and faculty to Belize, England and Costa Rica. Outside of math, Hughes taught English in China for seven summers.

HEADWAE was established in 1988 to honor academically talented students and faculty who have made outstanding contributions in promoting academic excellence. The 29th annual program is scheduled for Tuesday, Feb. 2, 2016.