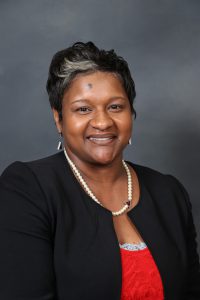 Sherry Franklin was named to the position following official action Wednesday by the college’s Board of Trustees.

In 2018, Franklin was named recipient of the 3E Award, Emphasis on Excellence and Education, which is the highest honor given by the college. Additional recognitions for her work include being named in 2007 as Tech Prep Exemplary Site Coordinator by the Mississippi Manufacturers’ Association and the Mississippi Department of Education, Office of Workforce Development and Vocational Education. She serves as Vice President of the Rankin County Chamber of Commerce Education Committee. She is also a graduate of Leadership Rankin and the Mississippi Community College Leadership Academy.

“My connections to the Utica community are deeply rooted and personal,” Franklin said. “My father ministered for 40-plus years at churches in Utica and Learned. My mother was a native of Edwards and a graduate of the former Utica Junior College.

“As vice president, I am committed to provide cultural, ethical and servant leadership. Working with the Utica leadership team, I plan to strategically target and capitalize on areas of opportunity for sustainable growth in enrollment by continuing to enhance residential housing for students, faculty and staff; by building capacity in community collaboration, and by meeting the needs of workforce through industry training.”

Since 2017, the vice presidency of the Utica Campus was held by Dr. Tyrone Jackson, who has accepted a position as president of Mississippi Delta Community College.