Phillip Wallace had something of a clue from an early age about how best to achieve his goals. He just didn’t appreciate the lesson for a while. “When I was…
By: Danny Barrett Jr.

Phillip Wallace had something of a clue from an early age about how best to achieve his goals.

He just didn’t appreciate the lesson for a while. 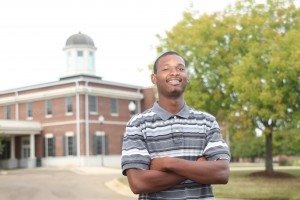 “When I was 12 or 13, I remember my mom putting me to work when I wanted $10 to go to the store to buy something,” Wallace said. “She said, ‘Well, there’s a lawnmower, a weed eater and some gas.’ That’s what started me off cutting grass and trimming bushes.”

Wallace, 24, of Jackson, is now enrolled in Hinds Community College’s MI-BEST program, Mississippi’s version of the nationally recognized Integrating Basic Education and Skills Training program, or I-BEST. It allows adult students to train for a job skill while earning their GED high school equivalency certificate at the same time. Students are prepared to be job-ready in six months to a year, train in high-demand areas and earn national certifications.

But before getting involved in the Hinds program, Wallace’s life was derailed by a 2 ½-year stint in the prison system, a phase of life he chalks up to environment.

“It was a rocky teen life,” he said, adding a scheduling error in high school caused him to miss out on his senior year. “Highest grade was the 11th grade.”

Homelessness and bad decisions put Wallace on the street, then in jail. “Basically, it happened from hanging with the wrong crowd,” he said. “I got in trouble with the law, but I’ve learned a real good lesson from being incarcerated.

“I got tired of the street life, smoking marijuana and hanging around the same old crowd and negative influences, period.”

Now three years into a four-year probation sentence, Wallace is ready to learn in the classroom and in life.

“I have goals set for myself now,” he said. “The only way to achieve those goals is to get back in school.”

Aleisha Coins, one of six “navigators” in the program that help students with things such as transportation, child care and financial aid, met Wallace during orientation period for the program.

“Phillip has overcome several challenges in order to get to this point and he is aware of everything that he needs to do to become successful,” Coins said. “I am confident that he will become an outstanding working citizen.”

Wallace is taking academic courses four days a week at the Raymond Campus and is interested in construction-related career-tech programs. But his experience working heavy equipment with a landscaping firm earlier in his probation rekindled a love for all things earthy.

“I would really love to work with landscaping and with planting things to make things look better,” Wallace said. “It’s my playing field. And I’d love to help make Jackson look better. I love my city, but I just don’t like the way it looks. I want to make sure my home town looks decent, not with grass and vines everywhere.”

He’s also had helping hand-up from the Hinds Community College Foundation, which responded to Wallace’s need for stable housing by awarding him the Fountain Family scholarship. It’s paying for living space on campus and his meal ticket for the remainder of this semester.

“Phillip applied for a Foundation scholarship to cover room and board expenses, and was graciously awarded that scholarship based on financial need,” Coins said, adding an exceptional interview for an Individual Training Account Scholarship through the Workforce Investment Act helped him land funds to cover tuition, books and fees.

Each Hinds MI-BEST student is “adopted” by a community partner that helps students with needed support services.

Wallace’s community sponsor is Jackson-based Stewpot Community Services, which sent sack lunches and helped organize his transportation to class until the scholarship came through. The group worked with Working Together Jackson, a larger community initiative, to get involved in Wallace’s story as he got his life back in order.

“There are so many people like Phillip who need a program like MI-BEST to be able to get jobs that pay livable wages and have a career path,” said Heather Ivery, business administrator for Stewpot. “We are excited to be working with Hinds CC and Working Together Jackson to provide the community support these students need.”

“Philip Wallace is an example of a young man who is willing to take advantage of a second chance when it is given,” said Perry Perkins Jr., lead organizer for Working Together Jackson. “That is what the partnership between Working Together Jackson, its members, the City of Jackson and Hinds Community College is doing­—creating for Philip and others a pathway out of poverty.”

Wallace said being in a healthy learning environment the program affords its students has made all the difference.

“It’s been a learning experience, but it depends on what you want to learn from it and better yourself. You can learn from your mistakes, but only if you choose to.”

Registration in the program for the spring semester is 8:30 a.m. to 4 p.m. Dec. 16 and Jan. 4 at the Raymond Campus. To reserve a spot, go to http://hub.hindscc.edu/mibest or email Angela.Hayes@hindscc.edu. Scholarships are available for students who qualify.