About a dozen legislators, mostly from Hinds County, were treated to stories about programs that get students trained and into the workforce at Hinds Community College’s annual legislative luncheon on…
By: Cathy Hayden

About a dozen legislators, mostly from Hinds County, were treated to stories about programs that get students trained and into the workforce at Hinds Community College’s annual legislative luncheon on Nov. 8. 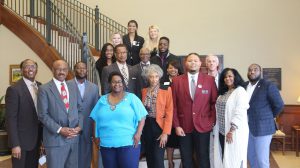 Afterward, four legislators toured two Hinds career-tech labs, the Fab Lab and the Mechatronics lab. The Fab Lab, under the direction of Phil Cockrell, is outfitted with 3-D printing machines, laser cutters and related equipment capable of etching designs or cutting flat sheet material such as acrylic and metal. The machines are programmed by a control panel or computer. Mechatronics, under David Creel, is a blend between electronics and mechanical and was specifically added to the curriculum because of the new Continental Tire plant going up in Hinds County.

Among the students who spoke was Shaqwon Roberts, 22, a culinary arts student at Jackson Campus-Academic/Technical Center who is in the M2M program that mentors and tutors minority males.

“These first 21 years as a young African-American man were not promising. Since losing my father, my family has struggled paying bills and barely made it through. I worked 12 hours a day to help – without sleeping or studying for tomorrow’s test. Let’s state the fact, I nearly failed all my classes that semester,” he told legislators. “I’ve gone from academic probation to being in good standing and my grades are an A and two Bs.”

Misti Lopez, 37, of Hazlehurst, is a MIBEST student studying welding on the Raymond Campus.

“It doesn’t matter how old you are or what you’ve been through – you can accomplish anything you put your mind to,” she said. “I plan on getting a welding certificate and going to work. To me, it’s a type of art. I love to draw and I’m good with my hands, so I’m doing both.” 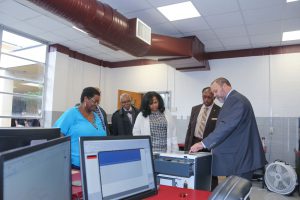 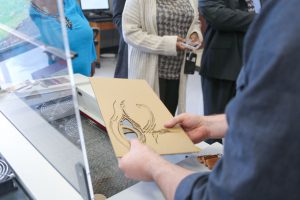 Hinds Community College’s Fab Lab machines can be programmed to design and cut out a die for use as a mold.

Among the statistics Muse shared with legislators:

“We need to put in new programs that meet the needs of business and industry,” he said. “We’re the bridge to a better life.”

Sen. Albert Butler, D-Jackson, agreed with Muse’s assessment. “Workforce development is the key to Mississippi moving forward. All of us are aware that there is a need to move the lower class to the middle class. And the only way we can do that is to start training individuals so they will be able to earn the type of salaries that were presented to us by Continental Tire and other companies,” Butler said.

Muse referenced a story in The Clarion-Ledger that the University of Southern Mississippi has made $8 million in cuts because of financial difficulties.

“Hinds is in the same boat. As the state appropriation for community colleges goes down, the student part goes up. For the first year, our local contributions from tuition and our counties are more than the state’s contribution,” he said. 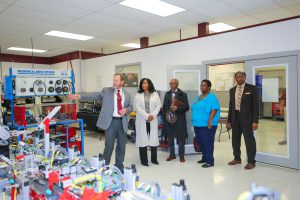 Sen. David Blount, D-Jackson, said the tax cuts made in 2016 have meant the Legislature doesn’t have the money to fund priorities like education. And, the tax cut in future years will snowball to $33 million next year, $92 million the year after and so on.

“We’re in this position because of the decisions that have been made in the past two years by the majority in the legislature … and bad decisions by the political leadership,” he said.  “We’ve got to revisit some of those decisions so you can continue to do the outstanding work that you’re doing.”