PEARL — Earning her Career Certificate in Paralegal Technology was a snap compared to what Lesa Hutchens had to survive to walk across the stage May 13. “I had a…
By: Danny Barrett Jr.

PEARL — Earning her Career Certificate in Paralegal Technology was a snap compared to what Lesa Hutchens had to survive to walk across the stage May 13.

“I had a kidney transplant from my sister in 2014 after going through two years of dialysis,” said Hutchens, a Cullman, Ala. native who had moved to Morton, Miss. to be with her mother. “They lost me twice, so I’ve been given a miracle.” 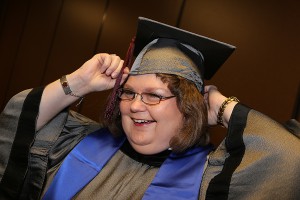 Lesa Hutchins, of Morton, graduated with a degree in paralegal studies during ceremonies at the Clyde Muse center on Friday, May 13. (April Garon/Hinds Community College)

Dr. Scot Edward Long’s resume’ of achievement stuck out long before he showed up to Friday’s ceremony with a gown that was a bit more decorated than the average two-year grad. 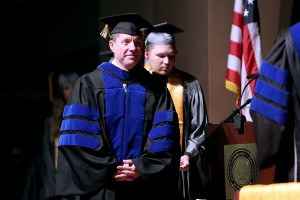 Dr. Scot Long, a professor at Mississippi College, received his Associate of Arts degree during graduation ceremonies at the Clyde Muse Center on Friday, May 13, 2016. (April Garon/Hinds Community College)

Long, an exercise trainer and professor of kinesiology at Mississippi College, has a Ph.D. in Human Performance from the University of Southern Mississippi and is a licensed personal trainer and strength and conditioning coach.

“I came here from 1983 to ’85, lived here, was the lifeguard at the pool,” Long said before walking across the stage to earn that nearly forgotten Associate of Arts degree. “I loved being at Hinds and I regretted never finishing up here.”

Graduates from Vicksburg had their sights set on the job market. Alexis Noble earned an Associate of Applied Science in Fashion Merchandising. 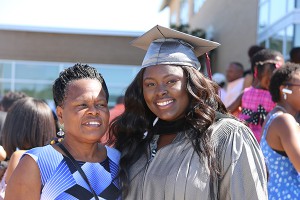 “I’ve always had an eye for it,” Noble said, soaking up the afternoon sun after graduation ceremonies May 13 with family members and others. “I have an opportunity in New York City and I’m taking it.”

Jennifer Ray earned a degree in Child Development and will be testing the job market soon.

“I’ll be job-hunting,” Ray said shortly after a photo with her brothers, Kenneth and Alex, and others.

Samantha Ables and Skylar Blades received associate degrees in Radiology and both plan to attend the University of Mississippi Medical Center to pursue medical careers – Ables in Nuclear Medicine, Blades in Sonography and Phlebotemy. Kirsten Dickard and Kristen Dunaway were another pair of medical field graduates on Friday, both having earned associate degrees in Physical Therapy. 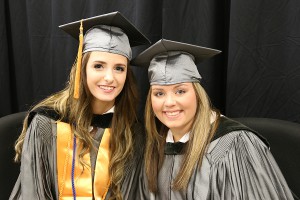 Samantha Ables (left) and Skylar Blades, both of Vicksburg, graduated with degrees in radiology during ceremonies at the Clyde Muse center on Friday, May 13, 2016. (April Garon/Hinds Community College) 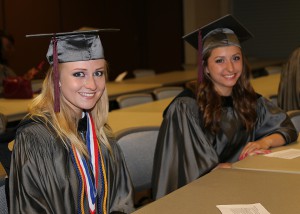 Kristen Dunaway and Kirsten Dickard, both of Vicksburg, graduated with degrees in Physical Therapy during ceremonies at the Clyde Muse center on Friday, May 13, 2016. (April Garon/Hinds Community College)

Samuel Porter, 51, knew how to cut meat, but was out of a job and the future looked uncertain.

“I got into Meat Merchandising because I like doing it,” said Porter, of Bolton, moments before Friday’s ceremony. 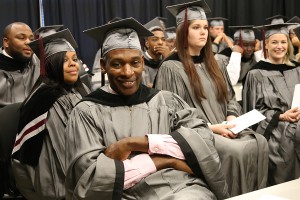