PEARL – Randy Kwan was something of a pioneer in the film industry in Mississippi when he finished his college days at the University of Southern Mississippi. “When I started…
By: Danny Barrett Jr. 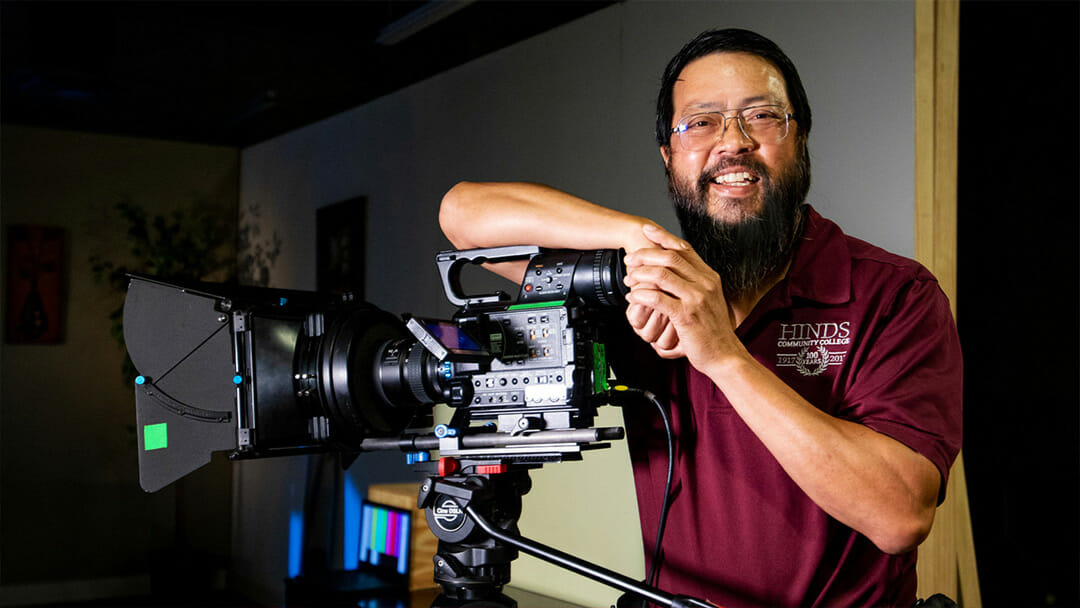 PEARL – Randy Kwan was something of a pioneer in the film industry in Mississippi when he finished his college days at the University of Southern Mississippi.

“When I started out in the industry in Mississippi, there was no industry here,” Kwan said. “Yet, a lot of my friends had the passion. What I try to give students here is the ability and boost I didn’t have.”

Kwan, of Pearl, earned his bachelor’s in Radio, TV and Film at USM in 1987 and enjoyed a 23-year career behind the lens in Mississippi and beyond as a photographer, cameraman and producer in television and film. He arrived at Hinds in 2010 as a media production specialist and, a year later, became instructor and curriculum coordinator in the Entertainment Media Technology program at the Rankin Campus.

He often points to the long list of duties displayed in the closing credits of any movie or TV show as goals to shoot for when advising students.

“Most people think of directing and photography when they think of film,” he said. “What I try to do is open their eyes to the possibilities of other positions in film – all those things you see in the closing credits of films. For example, I’ve had students start out in film production but gravitate toward documentary filmmaking, due to all the exposure to video and broadcasting.

“What I get a lot of enjoyment from is when I get students interested in the filmmaking process but not really sure where they want to go with it. I then channel their energy and giving them a direction on a career path.”
Those careers in entertainment media are evolving as rapidly as the devices used to capture images, he said.
“These days, TV production encompasses a whole lot more than network TV. With the expansion of on-demand streaming, we’ve learned to adapt to those aspects of media. And film production has become a hybrid of video production now. It’s done with smaller crews and with more digital cameras. It’s become easier, plus with COVID-19 going on, people are learning to work with smaller crews.

“Technology is always changing, so, just like the students, I’m constantly learning every day. One example is the growing sophistication of phone cameras. We’ve purchased the tools to take advantage of that. And when I talk to my friends in Hollywood, they believe virtual reality will be the next big step in media. Learning to utilize the equipment in production and post-production with that is the future.”
He sees his film and TV production classes as workforce development tool for an industry that still has a high ceiling for growth in Mississippi.

“I enjoy the constant possibility of creativity when it comes to the film industry. At Hinds, I’ve had several students go on and play major roles in the film industry in Mississippi. For me, that brings a great sense of joy. I feel like I’m a happy father.”