Hinds CC alumni Jody Gore, left, and Gary WaltersBack on March 29, 1939, a legend was born out of a tragedy. When Clear Creek in Edwards flooded during a torrential…
By: Cathy Hayden 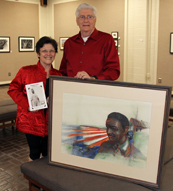 Hinds CC alumni Jody Gore, left, and Gary WaltersBack on March 29, 1939, a legend was born out of a tragedy.

When Clear Creek in Edwards flooded during a torrential rainstorm, washing out the Highway 80 bridge and plunging cars headed from Jackson to Vicksburg into the angry water, Andrew “Sugarman” Daniel jumped into the water time after time pulling up bodies. According to a June 1969 story in The Clarion-Ledger/Jackson Daily News, Sugarman pulled up most of the 16 bodies and helped haul out 10 cars.

Seventy-five years later, a book by Joedda “Jody” Gore of Clinton, who attended Hinds Community College in the 1980s, commemorates the legend of Sugarman, a powerhouse of a man also known as an “animal whisperer” and friend to local kids, who got his nickname from handing out free candy.

Gore said she got the idea to write the fictionalized account of Sugarman’s life when she first moved to Edwards in 1976. “Local people kept saying, ‘You’ve got to write something about Sugarman,’” she said. “There were so many stories.”

The town of Edwards is commemorating the 75th anniversary of this disaster on March 29 with a full day of activities ranging from music to a pet parade to a Sugarman look-a-like contest, all as a way to pay tribute to a local town character turned hero. The Utica Campus Jubilee Singers will perform as part of the 9 a.m. opening ceremony.  Warren County supervisors are renaming a section of road between Warriors Trail and the county line in Warren County as Andrew “Sugarman” Daniel Memorial Highway. Hinds County supervisors have done likewise between Smith Station Road and Highway 80 West.

Gore never met Sugarman, who died on June 7, 1969, but another Hinds alumnus did. Gary Walters (1967), who taught for many years at Mississippi College and elsewhere, met Sugarman a couple years before he died.

Walters said he was painting a water color of a 100-year-old bridge in Edwards, sometime around 1967, when Sugarman walked up with his entourage of dogs. Walters said he complained the dust and rocks they were kicking up were threatening his painting, so Sugarman said something like “Dogs go on home now,” and off they headed at a run back home. Sugarman also had a trained goat and pig that did his bidding as well.

“It was an interesting experience,” Walters said. “I never will forget meeting him. I had heard he could talk to the animals. I knew no one else could get them to pay attention. He didn’t raise his voice or anything.”

The experience of meeting Sugarman made such an impression on Walters that in 1976, as part of a Bicentennial collection of watercolors, he painted a portrait from memory.

Many of those watercolors sold at an exhibit at the old Deposit Guaranty Plaza in Jackson, but Walters held on to the Sugarman painting until Hinds Community College bought it a few years ago. It now hangs in the Utica Campus office of photography instructor Randy Minton.

Gore’s book “Sugarman” is available from Amazon in paperback and Kindle.