More than 900 earn 1,337 degrees and certificates
By: Danny Barrett Jr.

PEARL – Kiana Sanders already had a degree in psychology from Jackson State University when she faced a crossroads in life. 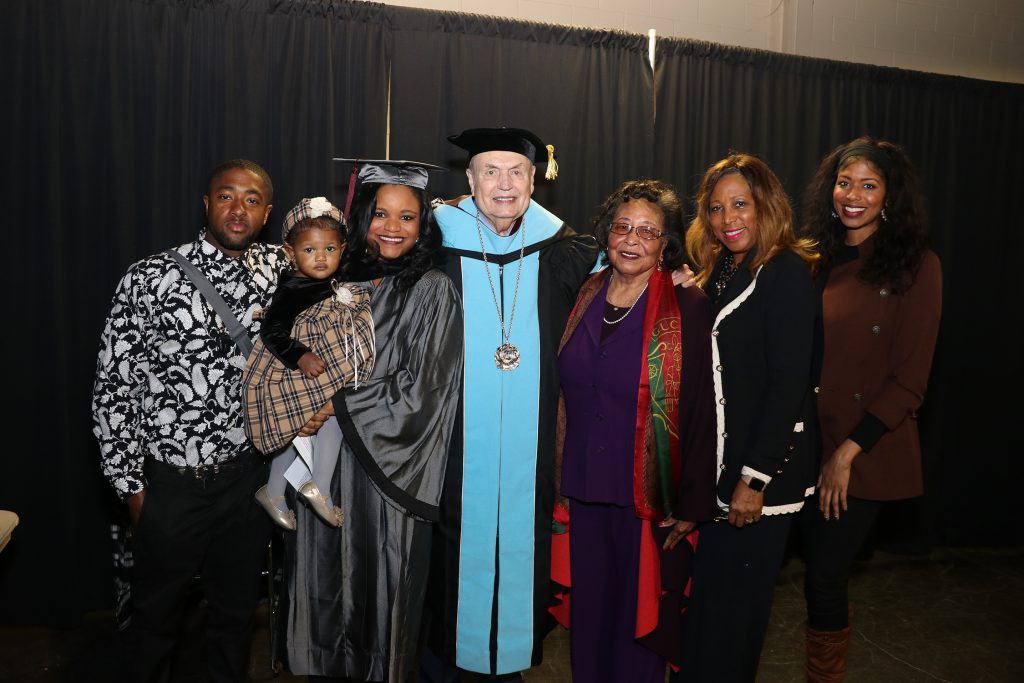 “I had started in the nursing program, then became pregnant with my daughter, Jade,” said Sanders, a third-generation Hinds graduate. Her late grandfather, Robert Pickett, was a superintendent of Vicksburg Warren School District and president of the college’s Board of Trustees.

“Someone told me about the practical nursing program at the Vicksburg-Warren Campus and here I am,” she said. “This ceremony feels so different from my previous graduation because I’m going after my passion, which is to be a nurse practitioner. I’m going after my RN and I’m not stopping.” 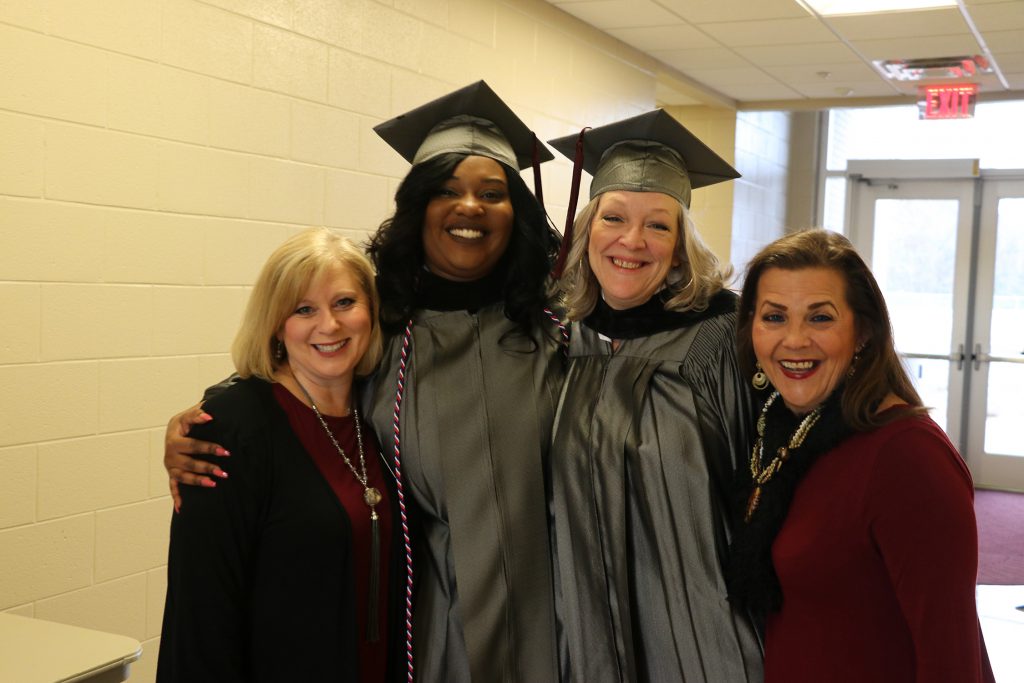 More than 600 participated in one of three ceremonies Dec. 13 at the Muse Center on the Rankin Campus.

Candice Miles, of Yazoo City, and Leigh Yerkes, of Jackson, both earned associate degrees in Practical Nursing during ceremonies with the help of the SNAP E&T Skills2Work program.

“I was a college professor at Indiana University-Purdue University Fort Wayne, but I wanted to build my skills and give this career a try,” said Yerkes, a mother of three.

Johnny Haggard, of Jackson, needed some additional credentials from Hinds Community College to advance his livelihood in the industry going forward. The program combines disciplines involved in the maintenance involved in running machinery used in the manufacturing plants of today. 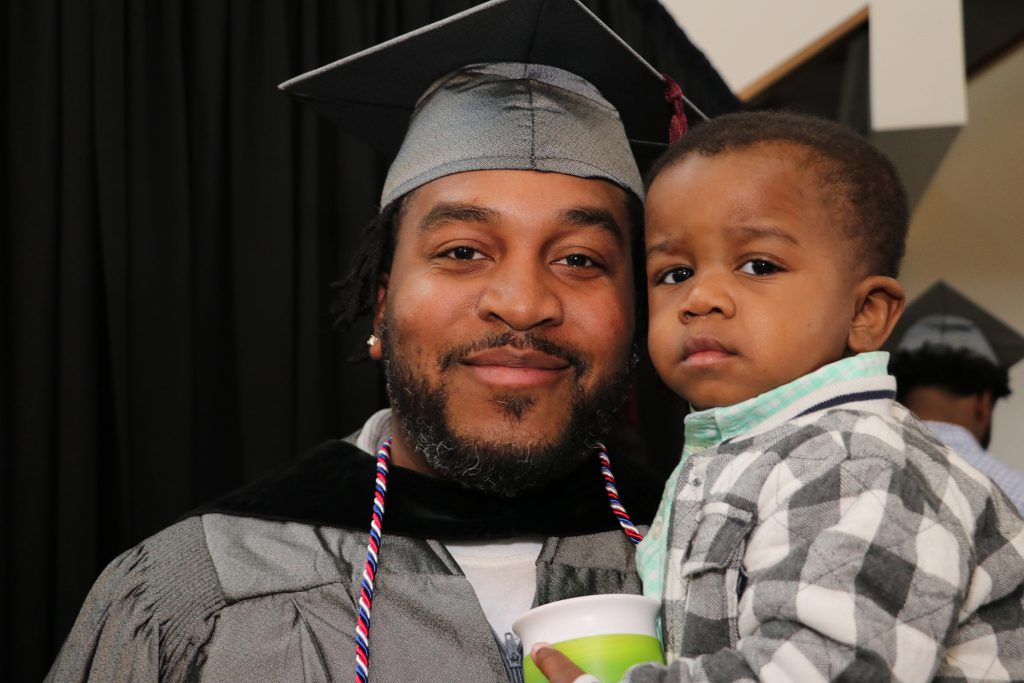 “I’m already working in it now, but if I want to get ahead and make more money, I had to get that extra paperwork,” said Haggard, clutching his son, Johnny Jr., 1, after earning a credential in Electrical Technology during fall graduation ceremonies Dec. 13.

“I have five more classes to take to get another one, in Industrial Maintenance,” he said.

Sharon Ames, 47, of Vicksburg, saw her daughter, Sha’quitia Williams, earn her first degree from Hinds last summer. It inspired her to return to school to jump-start her own fortunes. Both earned credentials during the fall — Ames a technical certificate in Early Childhood Education and Williams an Associate of Applied Science in Business Management Technology.

“I kept talking about coming back to school and finally just went in and talked to the counselors about it,” Ames said. “The teachers are awesome!” 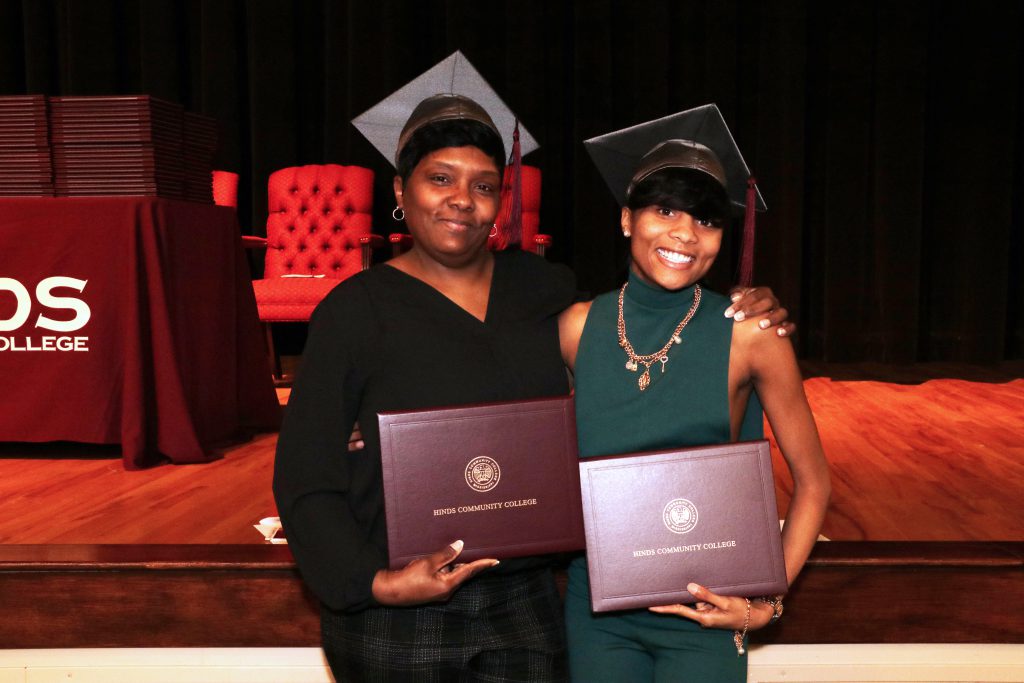 Dan Fuller, an English instructor at the Utica Campus who has been named the faculty HEADWAE honoree, was the speaker for all three ceremonies.

Fuller used story of the 1903 founding of the Utica Institute, an HBCU (Historically Black College and University), by Tuskegee graduate William Holtzclaw as a guideline to talk to graduates on the themes of persisting, finding one’s passion and dealing with pain. The Utica Institute eventually became the Utica Campus of Hinds Community College after a federal court order merged two colleges merged in 1982.

Fuller noted that Holtzclaw tried three times to establish a college for black students in Mississippi before he finally succeeded in Utica in rural Hinds County. “He persevered, even when the going wasn’t easy,” Fuller said. “As you continue with your careers, you’ll run into roadblocks, no doubt. And we often say that sometimes life closes doors, but you know something that all doors have is a handle. Sometimes a closed door doesn’t mean quit, but rather, turn the knob and push your way through.” 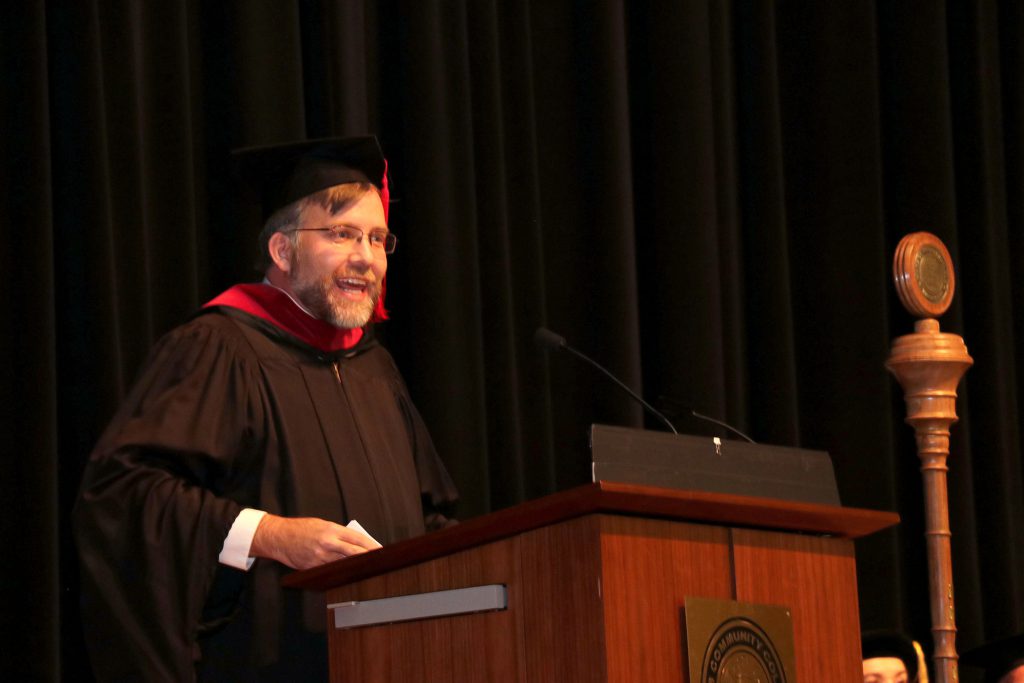 Holtzclaw was able to expand the college because his board of trustees was willing to take personal risk, he said.

“His board of trustees felt so passionate about the work that they pledged their farms and homes to secure the purchase of the property, even without the promise of outside funding. The personal risk that these men took to risk everything they owned shows the kind of passion that makes life worth living,” Fuller said. “So I ask you, what are you passionate about? What’s the thing that if you can’t do, your heart would break? Do that thing and do it well.”

Holtzclaw founded the group now known as the Utica Jubilee Singers to travel in the North and help raise money for the school. The first year, the group was stranded at a train station in the cold and the choir director later died after falling ill from the experience.

“The tragedy could have broken the fledgling enterprise, but Holtzclaw was able to deal with the pain of this loss by looking to the larger dream, even when life didn’t go according to his plan,” he said. “Some of you have gone through tremendous personal pain to make it here today and all of us will face adversity at some point in the future. The relationships you have built during your time here, along with those of your friends and family, can be a source of strength to you when the road gets difficult.”

Fuller closed his remarks to graduates by reminding them that “education is a lifelong journey.”

“This doesn’t have to be the end of your association with Hinds. We urge you to become involved with your Hinds Alumni Association. Come back to the college and share with future students what you’re learning in your future careers,” he said.