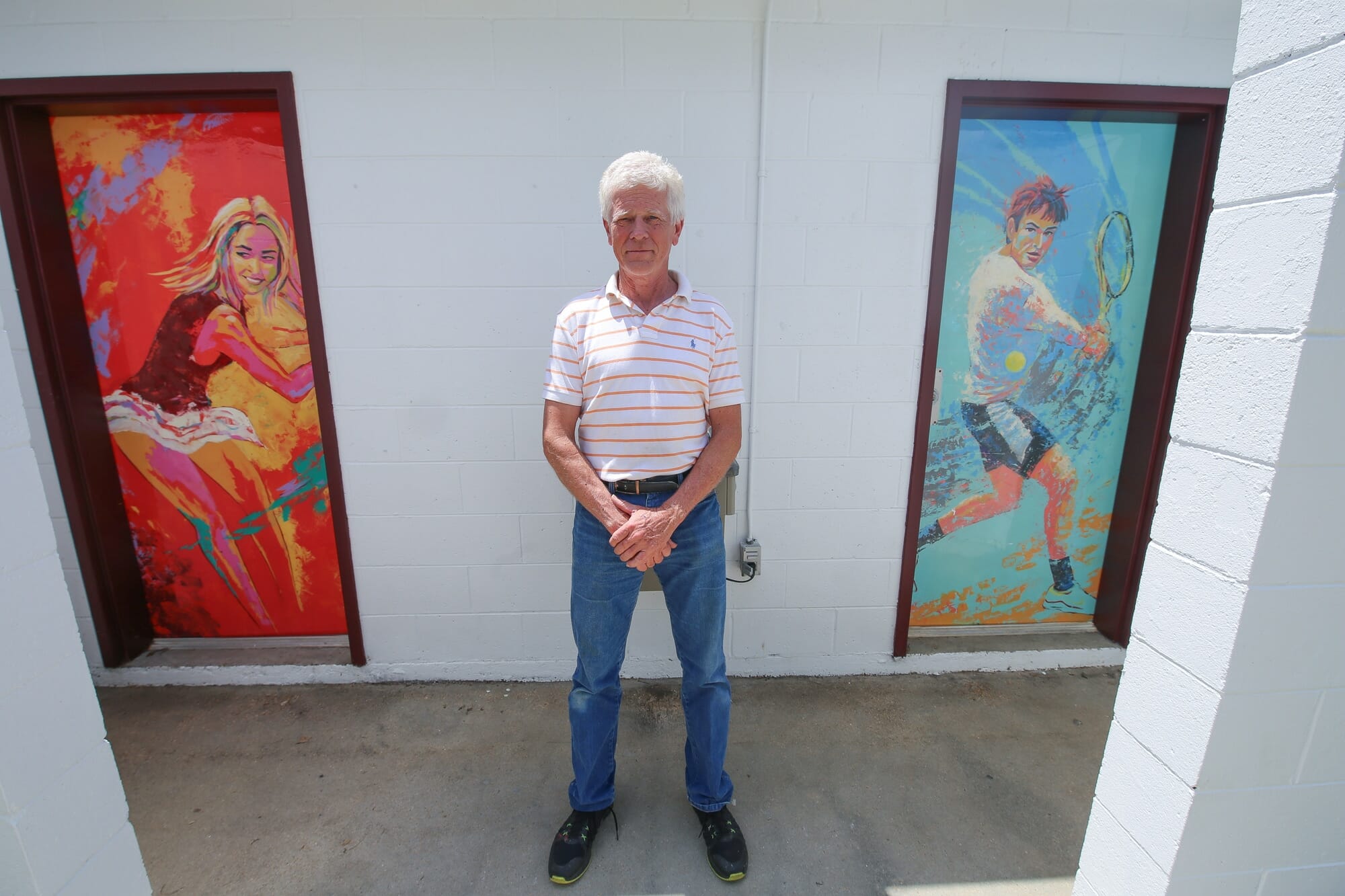 RAYMOND – A sleek new playing surface and new court windbreakers are what most supporters of the Hinds tennis program will see going forward at the newly minted Cleon McKnight Tennis Center on the Raymond Campus.

Mark Millet, with his handiwork on the doors of the restrooms at the Cleon McKnight Tennis Center on the Raymond Campus (Hinds Community College/April Garon)

What they might miss at first glance, however, is the art display on the restroom doors at the facility that came courtesy of Mississippi artist and Hinds alumnus Mark Millet.

The imagery captures the vibrancy of the program past and present, said tennis coach Jacki Millet, his wife of 38 years. The center was dedicated during a ceremony April 2.

“We were trying to just get everything looking as nice as possible,” Jacki Millet said. “I think it probably had been 20 years since the tennis courts were last resurfaced. And so for the doors, my thought for Mark was to have a male and female tennis player on each of them, since neither were marked properly before.”

Mark Millet credits part of his inspiration with his sports-inspired art to the late expressionist painter and legendary sports illustrator LeRoy Neiman, who brought “action shots” to life for everything from football to horse racing. It was a more physically demanding task to tackle the job at the new tennis center, though.

“I did it mostly myself, laying them flat so the shiny coat could get on there and not drip,” he said. “Each door weighed about a hundred pounds when I pulled them off the hinges. The tennis players on the team helped me get each out of the van and hang them.”

A good sanding-down and smooth base coat later, the doors are now adorned with action shots of male and female tennis players he says are based on composites, though he says longtime tennis fans would agree each bear likeness to recognizable pro tennis legends Jimmy Connors and Chris Evert.

“I love to express sports in color and to create art in a public space,” he said. “Sports for most people is entertaining and exciting. So, the challenge for me is whether I can bring excitement and energy to a two-dimensional object. I enjoy sports just as an enthusiast, so I think I can pull it off. I’ve learned from pros who’ve done it before me. When I get a cool stroke of paint going, I just say to myself, ‘Enough!’

“But, I give the credit to my wife, Jacki, that I could paint those doors. She knew that the Cleon McKnight event was coming, so it was time to get the place spruced up.”

Millet attended Hinds from 1977-79, then went to work as a commercial artist for Mississippi Federation Co-op. That has led to a career that has taken him to companies such as Raytheon and Aerospace Municipalities. For the better part of the past 17 years, Millet has divided his time between freelance art for commissions, based out of his Ridgeland studio, and teaching art part-time at Hartfield Academy and Canton Academy.

“I couldn’t have had a better teacher than Bob Dunaway,” he said. “He actually went out and recruited artists in high school, like a coach going out and recruiting athletes. He had a two-week camp in the summertime where he got kids from Grenada to McComb to come here and learn painting, drawing, design, sculpture, pottery, all of that. The winners got scholarships and/or money for art supplies. I wound up getting both of them. Once in his class, we got outside and painted from nature instead of just painting from a picture. And that’s how I teach my students today.”

He advises young artists to be themselves and create from their own travels and experiences. “We’re mentors. Their brains are still forming and we’re trying to mold them. Anything I can give them from my own life experience, I share it because I’ve been there.

“You don’t have to paint the Grand Canyon if you don’t love the Grand Canyon,” he said. “Paint your own backyard. Create from your own experiences because there’s people out there just like you.

This story appeared in the Summer 2019 edition of Hindsight magazine. For more information on scholarships through the Hinds Community College Foundation, visit https://www.hindscc.edu/admissions/costs-aid/scholarships/foundation-scholarships