Note: The following story appears in the summer issue of Hindsight alumni magazine. For more information about the Hinds Alumni Association, see the website. MAGEE – After graduating from Mendenhall High…
By: Danny Barrett Jr.

MAGEE – After graduating from Mendenhall High School, Gloria Patrick Lucas felt as many young people do when they leave the nest.

Confidence and a ready smile weren’t a problem. The fine points of academics and other means of self-expression were another matter. But she found help at Hinds as well as an identity. 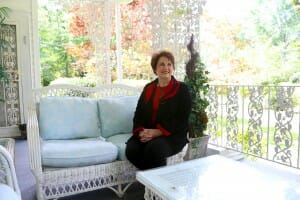 “When I graduated high school, I’d never heard of an essay,” Lucas said, crediting her freshman English instructor Anne Hardy with helping her double down on studies. “She taught us how to break it down and write paragraphs from note cards and just had us feeling good about it. Feeling good about yourself is just as important as anything you learn in a textbook.”

Challenging herself meant trying out for the Hi-Steppers precision dance team without prior experience. Still, she had no problem impressing the program’s legendary longtime director Anna Cowden Bee.

“I can remember being at marching practice early one morning when she came and patted me on the butt and told me, ‘Well, I can tell you were a majorette!’” she said, barely able to contain her laughter. “No! I wasn’t! I don’t know what it was, but I was trying hard to try to be one.”

She also took the Homecoming Queen title for 1966 as well as winning Miss Hinds and the Eagle Beauty Revue pageants.

She completed her bachelor’s degree at Blue Mountain College, where she majored in elementary education. She taught math in Mississippi and Alabama for the better part of 30 years, along the way winning the Starkville Rotary Club’s Teacher of the Year honor in 1991. She had married longtime high school football coach Tommy Lucas after graduating from Hinds and had two children, Doug and Kara. Tommy Lucas died in 1999.

“Even today, she’ll light a room up and make you always feel like you’re her best friend,” said Bonny Burnham Tigrett, a former dorm roomie who often did the young beauty queen’s hair. “She likes making people feel special and has a servant’s heart.”

Years spent attending sports and academic dinners, banquets and parties produced a knack for hosting events, which helped set the tone for her life after teaching.

In 2002, Lucas purchased The McAlpin House, a quaint little manor tucked away off Highway 49 in Magee. Built in 1903, the home bears the name of Erman and Emma McAlpin, who for years ran a department store in town. Today, Lucas rents it out for wedding receptions and other special events.

“After hearing the house was for sale, I immediately fell in love with it and could see the potential of a new life back home,” she said. “With the help of my daughter, Kara, who’s an interior designer, the house was restored, making it a unique Southern venue for special events.”

More recently, Lucas has purchased a second venue for weddings and getaways – one that surely comes with a nod to Mississippians’ love for the outdoors. 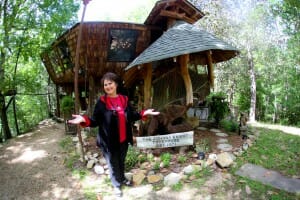 Gloria Patrick Lucas, in front of the house her uncle built and she purchased in 2015 (Hinds Community College/April Garon)

Completed in 1971 and named for her uncle, the Johnny Knight tree house is situated in the middle of a thick patch of woods in Mendenhall. Knight, an Army veteran once stationed in Cheyenne, Wyo., developed a love for the mountains and the outdoors in general thanks to his stateside assignment, she said.

Sold upon his death in 2003 to artist Gail Hederman, the structure is supported by cypress trees and split logs and is essentially a domed postcard photo in the middle of a pine forest. Inside, exposed beams that meet at the roof’s peak support a heavy chandelier that illuminates a bedroom, bathroom, loft, kitchen and living areas all open to one another. A separate, smaller cottage on the property is a “dressing room” of sorts for prospective brides preparing to walk down the spiral staircase to the altar, which is just north of the main house.

The architectural wonder was put up for sale again in 2015, and Lucas and her children got it back in the family. It’s an added draw for couples desiring a new kind of “destination wedding,” she said.

“A lot of girls here want the barn wedding, the woodsy and rustic look,” she said. “Since I bought it, I’ve added a deck and the wedding site.”

These days, Patrick is satisfied seeing her clients all-smiles and happy, just as she was in her tiara and homecoming gown in 1967.

“Life needs to be all about happy, finding contentment and a reason for being,” she said. “What joy it is for me, seeing the happiness in the eyes of bride and groom as they prepare for their special day and their life together.”