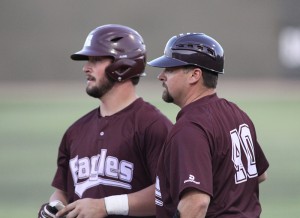 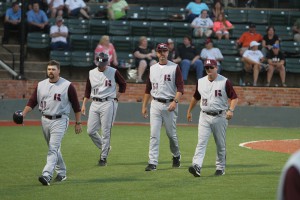 Hinds Community College and baseball. Both of those have figured prominently in Tim Axton’s (2014) life, 12 years apart.

Axton of Brandon was first a Hinds student from 1998 to fall 2000. He played catcher on the 1999 baseball team coached by Rick Clarke that went to the National Junior College Athletic Association (NJCAA) World Series, achieving a 16-30 overall record and a 13-11 record in the South division.

Axton went on to Mississippi State University but didn’t finish his college career then, however. He decided to go to work, then married and started a family.

He came back to Hinds in fall 2012 with a definite goal in mind: get a degree in education, become a teacher, maybe a principal at some point but definitely a baseball coach.

Family members helped convince him that he needed to do it. “I never thought I could go back to school. I was very scared to do that,” he said.

He had a conversation with Hinds head baseball coach Sam Temple (1990), who agreed it was what he needed to do.

So Axton enrolled in Hinds full-time and began taking steps toward his goal.

“I came back to start my quest to getting my degree in education. I was 34 years old and had not been in school in a long time. Everything had changed. Technology had changed; how you learn had changed,” he said.

But he wasn’t. Not only did he graduate from Hinds the second time around, he is now enrolled in the Delta State University 2 plus 2 program that allows him to get his education degree through hybrid and online classes through Hinds.

Axton’s second stint in college is as a married father of four with a construction business doing home remodeling and cabinet making. If all that isn’t enough, thanks to his long-standing relationship with Temple, he has been a volunteer baseball coach at Hinds for two years, coaching first base, catchers and hitters, and getting valuable experience he will need later.

Temple was all for allowing Axton to be involved with the team. He knew Axton would need the experience on his resumé in order to achieve his dream of coaching.

“Tim loves Hinds the way I do. He played here; he’s an alumnus. Hinds is very special to him — the program and those players. The relationship he has with them has always been great. His value is tremendous,” Temple said.

Axton even made his second trip to a baseball World Series with Hinds in May 2014 when the Eagles came within one game of winning the series in Enid, Okla., finishing with a 40-21 record. “It was just as exciting, and it brought back all the memories it did as when I was a player,” he said.

Both Axton and assistant coach Chad Bradford (1995), a former Eagles standout baseball player and member of the Hinds Sports Hall of Fame class of 2007, were invaluable for the second trip to the World Series, Temple said. “Both of those guys brought a great wealth of knowledge that helped prepare our players. They were able to tell the players about how it was and how it will be,” he said.

But Axton’s added value to the team is also in his ability to be a role model as a student to the other student-athletes. With his busy schedule as husband, father, builder, student and coach, he epitomizes the accomplishments of someone who is goal oriented and excellent at time management, Temple said.

“He doesn’t miss a day even though he’s a volunteer, which is a just a great example to our young men,” Temple said. “He is a living example of not only hard work but determination that when you make up your mind, that you want to do something, you can finish it no matter what comes in there.

“Whenever our guys feel a little gloomy about their time in reference to baseball and school, it’s always a conversation I let Coach Axton have. Absolutely no excuses,” Temple said.

For more on the 2 plus 2 elementary education program partnership between Delta State University and Hinds Community College, contact Terry Parrish at 601.502.7590.