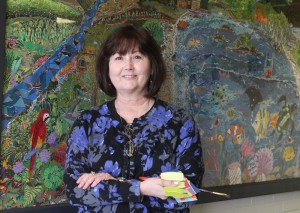 The following story was originally published in the spring 2015 issue of Hindsight alumni magazine.

Six years ago a trip to Costa Rica gave Hinds Community College art instructor Paula Lick Duren (1973) of Raymond an idea for an art project. She didn’t dream at the time it would take nearly five years to complete, and that it would one day find a home in the newly renovated science building, Beemon Hall, on the Raymond Campus.

That might seem like an unusual setting for the 4-foot-by-8-foot brightly colored mosaic, but once you know the inspiration behind it that makes perfect sense.

Duren, a Raymond native, grew up five blocks away from Hinds. Enrolling at Hinds was a foregone conclusion. As an art major she studied under former art department chair Bob Dunaway.

“I took drawing, painting and ceramics — everything they offered because I had always drawn and always created things. I knew I wanted to be an artist,” she said.

She finished her bachelor’s degree at the University of Southern Mississippi in 1975 and then signed up for the Army in order to get the G.I. Bill to pay for a master’s degree. “I went in as the helicopters were landing in Vietnam picking up people at the embassy,” she said.

She spent her three years in Washington, first as a Morse Code translator and then as a graphic illustrator for military intelligence. She married, lost her husband in a car accident, remarried and had a baby. She eventually finished the master’s degree she started while she was in the military at Mississippi College in 1986 while working as a graduate assistant at Hinds for Dunaway and Russell Schneider.

In 2008 she was invited on the international study trip to Costa Rica in the Honors Environmental Biology class taught by Sharon Feaster. The program was led by then Honors Institute dean Kristi Sather-Smith. Duren enrolled as a student in the class but also went as an art teacher. “I took sketch books and a notebook,” she said.

Everyone took cameras and shared photos. She became fascinated with the art in Costa Rica. “I started noticing all the mosaics. They would do mosaics in rock and stone, tumbled glass and shells and even painting them. It was just everywhere. It was on the wheels of coffee carts. It was painted on the walls. Or it was in jewelry. It was mosaics everywhere,” she said.

“So I said let’s make a mosaic. Oh, we can do it,” she said. But Duren felt that stone would be too heavy. She came up with the idea of using paint sample chips. She and many others collected them over time, separating them in piles by color family.

Using photos, her sketchbook and notebook as guides, Duren penciled scenes and wildlife from Costa Rica onto the stained board. Duren drafted the students from the initial trip as well as a follow-up trip, plus Art Club members and instructors who were part of international study trips to spend thousands of hours cutting the samples into tiny, irregularly shaped pieces and gluing them onto the board.

Sather-Smith, who retired in summer 2013, wanted the mosaic for the back wall in the Honors headquarters in Jenkins Hall. But Feaster was keen on having it in Beemon Hall because of the wildlife it depicted from the environmental biology trip.

“When she initially talked about creating the mural, I was so hoping that one day it could be hung in Beemon Hall,” Feaster said. “Today, we are delighted to have it here in Beemon, and we often see students reflecting upon it. It provides the perfect opportunity for the biology faculty to encourage them to consider participating in the next study in Costa Rica!”

When an extensive renovation of Beemon Hall was completed just before the spring 2015 semester began, the mosaic was mounted in a wood frame under Plexiglas and put on the wall under special lighting.

“I didn’t know it was up until (Jan. 6) convocation. I was flabbergasted,” Duren said. Duren’s next project is to create a legend that will explain what’s depicted in it. 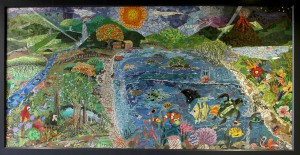 The top part of the mosaic is the skyline that includes Costa Rica’s Arenal Volcano. The top left side is daylight with the right side going into the night.

It includes a stream, waterfalls, the bay, the rainforest, the coffee fields, banana plantation and mangroves. It also includes “every creature that I could think of that we had seen,” Duren said. Those include the spider monkeys, howling monkeys, viper snakes, the Blue Morpho butterfly and other insects, parrots, toucans, the hummingbirds, sea turtles, crab, octopus.

With a total construction cost of a little more than $4.1 million, every room in Beemon Hall, approximately 25 classrooms and labs, plus offices, was upgraded. Its last renovation was in 1983. The renovation started in June 2012 and finished in November 2014.

The general contractor for the project was Coleman Hammons Construction Company Inc. of Brandon. The architect was Duvall Decker Architects, P.A., Jackson.

Beemon Hall is named for T.T. Beemon, who was science chairman on the Raymond Campus and taught biology from 1946 to 1983.

He and his wife Emma were named co-winners of the Alumni Service Award in 1990. He died in September 2007.